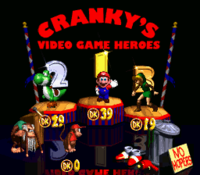 Cranky's Video Game Heroes is an awards ceremony hosted by Cranky Kong on Donkey Kong Island[1] in Donkey Kong Country 2: Diddy's Kong Quest. Its purpose is to see who can collect the most DK Coins. Diddy Kong participates in the event after the player completes the game, and can subsequently revisit Cranky's Video Game Heroes if the player simultaneously presses the

buttons from the world map.

The event also appears in Donkey Kong Land 2, where it has the same role, although it is no longer hosted by Cranky. To reflect the change, the ceremony was simply renamed Video Game Heroes.

At the bottom-right a corner of the screen, Sonic's shoes and Earthworm Jim's plasma gun appear next to a trash can, and a sign which says "No Hopers" leans against the trash can. This suggests that Sonic and Earthworm Jim failed to collect enough DK Coins for the competition, and is a real world reference to Nintendo and Sega's console rivalry at the time. This detail does not appear in Donkey Kong Land 2 and the Game Boy Advance remake.

A few things were changed in the Game Boy Advance version of Donkey Kong Country 2. The scenery was changed from a pitch black room to a shore, and the podium was changed to have a barrel appearance. Yoshi and Link have switched places to third and second respectively. The remake has more DK Coins, and as a result, every contestant's DK Coin count has been updated: Mario has 67, Link has 50, and Yoshi has 39.