Kannon's Klaim is the seventh level of Donkey Kong Country 2: Diddy's Kong Quest and the second level of Crocodile Cauldron. It is the first level set in a mine shaft. Like the rigging levels from Gangplank Galleon, the level involves Diddy Kong and Dixie Kong traveling a vertical path to reach the top of the level. To progress through the level, the Kongs must jump from wooden platforms and blast from Blast Barrels and some Arrow Barrels. Kannons make their first level appearance as the main and titular enemy: their attack is to either blast cannonballs or barrels at the Kongs. Mini-Neckys also make their first in-game level appearance in Kannon's Klaim. There are some recurring enemies who appeared in earlier levels: Neeks, Krunchas, Flitters, Klomps, and Zingers.

In the Game Boy Advance version's Sound Test, the background music for mine shaft levels has the same name as the level itself, Kannon's Klaim. 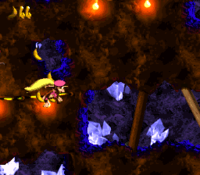 Dixie Kong grabs some bananas in the air

A Blast Barrel is above them that can shoot the Kongs onto a platform with a Kannon on it. They can use the barrels shot by this foe to reach a nearby DK Barrel placed high in the air. Several Blast Barrels are to the right of the Kannon, and the heroes must use them to rise through the level. As they shoot upwards with the barrels, they reach a Flitter that is surrounded by a Zinger. They can use the Flitter to bounce to a hidden set of barrels that can shoot them in a circle to many bananas and a Banana Coin. If the primates shift to the left when the blast out of the Blast Barrel to the left the previously-mentioned Flitter, they can land in another barrel on the main path of the level. They can use this barrel and the barrels ahead of it to reach a platform higher in the level. As they approach this platform, they come up to a Flitter that they must bounce on to cross a gap between two of the barrels. Once the platform is reached, the heroes can find a TNT Barrel and another platform that supports a barrel-shooting Kannon. The letter O is high above this platform, which is followed by two more platforms. The first of the platforms holds a Klomp, while the next one carries a Kannon that shoots kannonballs at the Kongs. If the heroes shoot upwards with the Blast Barrel above this foe, they can reach a platform with a DK Barrel on it and a Star Barrel over it. 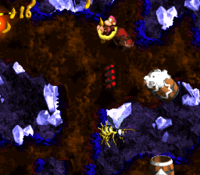 Dixie Kong shoots out of a Blast Barrel

A Zinger is to the left of here, and it guards a Blast Barrel that can shoot the heroes towards more Blast Barrels. As they travel to the west above an abyss with these Blast Barrels, they must also watch out for a few Zingers. Soon, the primates reach a barrel that can blast them higher up to a platform that holds a TNT Barrel. As they head across this platform, a Mini-Necky dives at them. After they pass the enemy, they reach a Zinger that guards two Blast Barrels. The first of the barrels is aimed to the north towards a higher platform, while the second, which floats under a Banana Coin, is positioned towards the first barrel. They can use the first barrel to blast onto the higher platform, where they can find two Mini-Neckys, a DK Barrel, and, to the left of the platform, a Bonus Barrel. A platform is to the right of here that sits under a Blast Barrel, which can blast the heroes past a Zinger and to some more Blast Barrels. These barrels shoot them in a curvy path into many bananas and then into one last barrel that can shoot them a small distance into the air.

A platform and a Zinger is to the left of this barrel, and the platform holds a TNT Barrel. Another platform is ahead of here that supports a Kannon that shoots kannonballs to attack. The duo can find a Blast Barrel behind it that can blast them upwards to more barrels. As they climb upwards through the shaft with these barrels, they must watch for a few Zingers that hover over the barrels. Soon, the primates are blasted onto a solid platform with a Mini-Necky near it. A platform is placed to the right of this foe that holds a Diddy Barrel with the letter N above it. The Diddy Barrel can blast Diddy Kong, but not Dixie Kong, to a few Blast Barrels that can fire them in a circle to many bananas and a Banana Coin in a hidden area. To the left of the aforementioned Diddy Barrel, the heroes can find a trio of Blast Barrels lined up under a Zinger that hovers over them. If they manage to dodge this enemy and reach the last of the three barrels, they are blasted upwards onto a platform with another Blast Barrel above it. A gap is to the right of here, and on the other side of it, the heroes can find a hidden platform with a barrel-shooting Kannon and a Bonus Barrel on it. If the primates enter the nearby Blast Barrel, they are shot up to a platform with a Treasure Chest that contains the letter G on it. As they head across the platform, Mini-Neckys attack them. There are two more platforms ahead of here, and once the heroes reach the second of the platforms, they can find an End of Level Target with a golden feather (found exclusively in the Game Boy Advance version of the game) above it. If they hit the target, they complete the level successfully. Additionally, they can bounce off of a nearby Mini-Necky and then hit the target to win a prize from it. The prizes include either a Banana Bunch, a Banana Coin, or a Red Balloon. 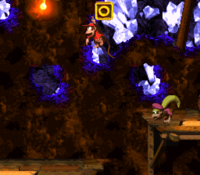