Rattle Battle is the fourteenth level of Donkey Kong Country 2: Diddy's Kong Quest and the fourth level of Krem Quay. From the world map, Rattle Battle is shown to take place on the deck of Glimmer's Galleon, and features green water in the background. At the start of the level, the Kongs enter a cabin where they must enter a Rattly Barrel, which transforms them into Rattly for most of the level. Rattly must make use of his high jumping ability and the even higher Superjump to reach higher areas and continue in the level.

The most common enemies in the level are Zingers and Kaboings (both their gray and uncommon green variant). Rattly can bounce on these enemies to defeat them and to get a boost in height. There are also Kannons, who blast out either cannonballs or barrels. Jumping from a Kannon's barrels is another way for Rattly to go across gaps. Late into the level, there is a wide gap that Rattly cannot get across by himself, even with his Superjump, so he must bounce onto barrels shot by a Kannon to reach the higher area. 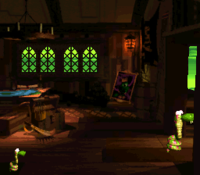 Rattly makes his way to the ship deck.

The level begins on a ship deck under a hidden Blast Barrel that can shoot the heroes into the air and onto a high section of the ship that contains a Banana Coin, a Banana Bunch, and a Bonus Barrel. Across from the level's start, there is an entryway that leads into part of the ship. Here, the Kongs can find an Animal Barrel with a trio of bananas under it. If they enter the barrel, they turn into Rattly, who must proceed by heading through the nearby entryway on the end of the room. After traveling through the opening, the rattlesnake finds himself outside on the ship deck again. Above him, there is a DK Barrel with a few bananas around it. A pile of two large barrels is also ahead, but a Kaboing bounces in front of it. If Rattly reaches the top of these barrels, he can collect the letter K that is placed on top of them. After passing some bananas that float in the air, Rattly makes his way up a small stairway and to a pair of Kaboings that jump in front of a large barrel. He can use this barrel to help him cross a small pit nearby. On the other side of this pit, there is another Kaboing and a lone Banana Bunch. A pit is also ahead of here with a Flitter flying above it. The enemy can be bounced on to help the rattlesnake cross the pit, even though Rattly's jumping abilities can also allow him to cross the pit with a single jump.

A trio of Kaboings bounce in the area ahead of here, and they are followed by a Zinger above a large barrel. The Zinger flies in front of a Banana Coin, so Rattly must defeat the foe in order to grab the item safely. The rattlesnake can find another DK Barrel ahead of here, along with some more Kaboings and some large barrels that he can use to help him cross an additional pit. Although he can cross this pit with his jumping ability alone, a Zinger is also above the abyss, and it can be bounced on to help him cross. Once the pit is crossed, Rattly approaches some Kaboings, two of which that bounce on the edges of a small gap. The Animal Friend is able to jump into this gap without falling in the water, as ground is at bottom of the gap. From the inside of this gap, he can head to the left to find a Bonus Barrel, or he can travel right to discover a Blast Barrel that immediately shoots him back onto the top of the ship deck when entered. A pit is farther ahead of here, and it is noticeably wider than the previous ones in the level. Two Zingers float in the pit, and one of them circles the letter O. Once Rattly crosses the pit, either by bouncing over it or by bouncing on the Zingers to cross, he approaches a Kaboing and a small stairway leading downwards. Some more Kaboings are after here, and they bounce on top of a large pile of barrels with a Zinger flying in front of it. The level's Video Game Hero Coin hides in an area inside the ship, which is placed to the right of the Zinger. The large barrel pile is followed by a small pit, and once the pit it crossed, Rattly can find the level's Star Barrel.

Rattly crosses the pit with the letter N above it.

The Star Barrel is followed by two small ledges with a DK Barrel and some bananas around them. A pile of six large barrels is after the ledges, and a Kannon with a Banana Coin behind it stands on it. Once the rattlesnake passes a few bananas located after this foe, he reaches a small pit with a Zinger above it. If he manages to cross this pit, he can find some more bananas and a Kaboing that bounces in front of a few large barrels. A golden feather, found only in the Game Boy Advance version of the game, is placed on top of these barrels. The letter N and some bananas float above a pit placed nearby. A Kannon shoots barrels over this pit, which must be crossed to progress to an additional pit with a Zinger above it. On the other side of this abyss, Rattly can find a large barrel with an arrow, formed by bananas, above it. The arrow points upwards, where a Bonus Barrel is hidden. A DK Barrel is ahead of here, being followed by some larger barrels that Kaboings bounce on. Once these foes and the barrels are passed, the rattlesnake makes his way down a small stairway and towards a pit with a Zinger above it.

The only way to cross this pit is by first bouncing off of the Zinger and then landing on the other side of the pit, where a kannonball-shooting Kannon stands. Another Kannon is located on top of some large barrels piled nearby, and it shoots kannonballs downwards. There is a small abyss farther ahead of this foe, and a Zinger flies above it. If this pit is successfully crossed, Rattly makes his way towards a large pile of barrels with many Kaboings on them. In the Game Boy Advance version of the game, one of these Kaboings sports a camera icon above its head, indicating that it is in possession of a photograph. The letter G is also on the barrel pile, which is followed by a pit that can only be crossed by bouncing off of the barrels shot by a Kannon on the other side of it. Once this pit is crossed, the rattlesnake makes his way down a small stairway with a Kaboing near it. On the bottom of the stairs, there is a Kannon, who stands on top of a pile of barrels and shoots kannonballs on the ground below it. After Rattly passes another pile of two barrels and heads up a small stairway, he comes up to a No Animal Sign. When this is passed, he turns back into the Kongs, who are given a Banana Bunch as a prize. An End of Level Target is located just ahead of here, and if it is jumped on, the level is completed. A Dixie Barrel is positioned above this target, and if the heroes shoot to the target with this barrel, they win a prize from the target, such as a Life Balloon. A DK Barrel is also hidden to the right of the target, and it is able to give the player Dixie Kong if they need her to enter the Dixie Barrel.

Rattly exiting from the room where the Kongs transform into him in the Game Boy Advance version
Retrieved from "https://www.mariowiki.com/index.php?title=Rattle_Battle_(Donkey_Kong_Country_2:_Diddy%27s_Kong_Quest)&oldid=3754932"
Categories: