Bramble Blast is the sixteenth level of Donkey Kong Country 2: Diddy's Kong Quest and the sixth level of Krem Quay. This is the first bramble level of the game, and in it, Diddy and Dixie Kong must navigate within a maze infested with brambles via many segments of Barrel Cannons, sometimes including a few Blast Barrels and Arrow Barrels. A segment of Barrel Cannons is usually located within an enclosed area, and most of them alternate between two or three directions. The Kongs must figure out a path from the Barrel Cannons to reach the last one that blasts them out the area through a narrow passageway. The Kongs can often find the correct path by blasting in the direction with a trail of bananas. Sometimes the bananas can lead them to an item, such as a Banana Coin, or in one instance, one of the Bonus Barrels. Zingers are the main enemy of the stage, although a few Flitters are also present. Sometimes, Diddy and Dixie go on-foot between barrel blasting segments, by walking on thin floorboards made of wooden planks. There are two floorboards with on-foot enemies, one having a single Klampon and the other having two Click-Clacks. The Kongs can find Squawks the Parrot just before the end of the level.

The Kongs begin the level on some wooden boards that carry them over the sharp brambles. A Banana Bunch is above the entrance to the level, and it can be reached with their team up move. If the primates travel to the east from here, they reach a Blast Barrel that shoots them into an area full of Barrel Cannons. They must use these many barrels to shoot to the top-right corner of the area, where another Blast Barrel is located. Before the heroes access this Blast Barrel, they are able to shoot to a Banana Bunch in the bottom-right corner of the area and also to a DK Barrel near the top-left corner of the same area. Once they reach the Blast Barrel, they are shot into another section of Barrel Cannons. A Zinger and the letter K are among these many barrels, which must be used to send the Kongs into the top-right corner of the area. Here, they can find a narrow passage containing a Zinger, and they must shoot through it to reach a larger area of Barrel Cannons. As they shoot towards the top of the area by using these barrels, they come up to some bananas, a Banana Bunch, and the letter O, which are all surrounded by the many cannons. 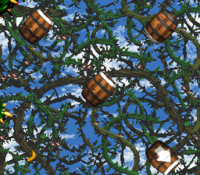 The Kongs shoot among the brambles and to another Barrel Cannon.

This Barrel Cannon tilts from left to right as it holds the Kongs, so they must shoot out of it when it leans to the right in order to shoot to another Barrel Cannon near here. This Barrel Cannon tilts just like the previous barrel, and it hovers under the letter N and next to a DK Barrel, which is followed by another Barrel Cannon. The heroes must shoot to this barrel to arrive in the sixth section of Barrel Cannons. Here, the cannons are placed along the perimeter of the diamond-shaped area. A single Blast Barrel is also placed among these Barrel Cannons, but shooting into it does not help them progress, as the barrel simply shoots them back to the beginning of the barrel section. As the two friends shoot through this section of barrels, they must watch out for a Zinger that flies in the center of the area. Soon, they make their way into a curvy, thin passage that contains a few Barrel Cannons that rotate when accessed. 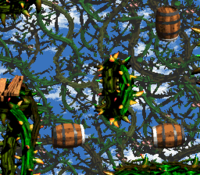 The Kongs in the square-shaped passage.

As they shoot through the thin passage with these barrels, they, in the Super Nintendo Entertainment System version of the game, come up to a red Extra Life Balloon that quickly floats away if they do not move fast enough. Eventually, the primates fire themselves into a slightly wider part of the passage, where they can find two more rotating Barrel Cannons and some more Barrel Cannons that simply tilt from left to right when accessed. As the primates fire through the area with these barrels, a few Zingers stand in their way, and they must avoid the enemies in order to reach a Blast Barrel that can shoot them upwards towards some wooden planks that support a Klampon. The Kongs must dodge this foe while avoiding the brambles only slightly above their heads in order to reach a trail of bananas that lead them into a narrow, square-shaped passage. Three Barrel Cannons are placed along this square-shaped area, and they rotate when the Kongs are inside of them. With precise aim, the duo must shoot around the square-shaped passage with them in order to reach another section of wooden planks. These planks, as the ones before, help carry the Kongs, along with two Click-Clack enemies, over some brambles. 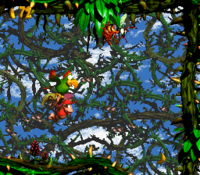 The Kongs riding Squawks in the hidden path of Bramble Blast.

A rather small area of Barrel Cannons follows the wooden planks, and while the duo shoots through the section with these barrels, they come up to a Banana Bunch, some bananas, and a Blast Barrel that can blast them into a larger area of barrels. Here, the primates can find a mixture of Barrel Cannons and Blast Barrels, along with bananas and, in the Game Boy Advance version of the game, a golden feather. Once the heroes reach the bottom-right corner of the area, they can find a Blast Barrel that is able to fire them through a thin passage and towards a trio of Barrel Cannons with bananas around them. The first two of these barrels rotate when loaded, so the Kong must watch their aim to avoid shooting into any brambles. The last of the three Barrel Cannons tilts from left to right when accessed, and it can be used to shoot into a nearby Flitter that the heroes must bounce on to reach a Blast Barrel. This barrel automatically fires the heroes into a quadruplet of Flitters, who Diddy and Dixie must bounce on in order to cross over the brambles. Some wooden planks are ahead of here, and they support an End of Level Target, which must be jumped on to complete the level. A Rotatable Barrel with only five seconds on it is above this target, and the heroes can win a prize from the End of Level Target if they shoot to it from this barrel.

If the primates bounce into the gap found before the previously-mentioned quadruplet of Flitters, they land in a Blast Barrel that is able to shoot them into another Blast Barrel in a hidden part of the level. This barrel can blast the Kongs into Squawks, who is able to carry them through the hidden area. To the right of Squawks's location, the group can find a Banana Bunch in the corner of the area around some brambles. To the left of here, the heroes can find a DK Barrel in a small alcove and some bananas that are followed by a wide passage leading to a small area that contains a Video Game Hero Coin, which is guarded by a Zinger. A pair of red Zingers are farther into the area to the right, and they both move back and forth in a vertical path. They are followed by a curvy path with a few Banana Bunches in it. After the heroes pass the second Banana Bunch, they reach a wider area with a red Zinger circling the inside of it. If they head down a small passage below this foe, they can find a Blast Barrel that can shoot them into a Bonus Barrel. Once they finish playing in the Bonus Level it leads to, they lose Squawks and are fired into the letter G, which is located in a narrow passage near here. The Rotatable Barrel with four seconds (five in the Game Boy Advance version) located above the End of Level Target is at the bottom of this passage. The possible prizes include a Banana, Banana Coin, or a Banana Bunch.