Pirate Panic is the first level of Donkey Kong Country 2: Diddy's Kong Quest and of its world, Gangplank Galleon. It takes place on a ship deck. Since it is the first level, Pirate Panic only features basic enemies. There are many groups of stacked-up barrels that the Kongs can jump on to reach collectibles. Kaptain K. Rool's cabin follows after the start of the level. It holds an Extra Life Balloon and a note from the crocodile himself, which states that he has kidnapped Donkey Kong and is holding him ransom in exchange for the banana hoard.

Much like the first level of Donkey Kong Country, Jungle Hijinxs, the Kongs discover Rambi around halfway through the level; he is required to break open a Bonus Area entrance. 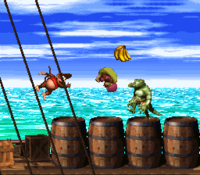 Diddy throws Dixie at a Klomp near the start

At the beginning of the level, there is a straight path leading under a trail of bananas, which the Kongs can optionally collect if they throw one another into a hidden barrel at the start of the trail. A doorway with a pair of bananas in front it is farther ahead that the primates can enter to find a letter from Kaptain K. Rool and an Extra Life Balloon. A pathway is ahead of the bananas that leads the heroes up some stairs with a Neek on them. A crate stands at the top of the stairway near some large barrels that can hold up a nearby Klomp. They can find a Banana Bunch above the barrels. A stairway leading downwards is after these barrels, taking the Kongs towards a flat area with some more large barrels that they can stand on. A gap is between some of the barrels, and the letter K floats above this gap. A crate and a DK Barrel are ahead, followed by a stairway with Neeks on it. Four barrels sit at the top of the stairs with bananas on it. The fruits are formed in the shape of the letter R. The letter O is just ahead in a lower part of the ship, along with two Klomps. The Star Barrel follows the letter. 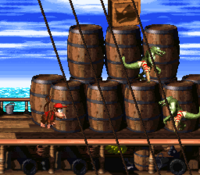 Diddy runs near the Rambi Crate.

A DK Barrel is after the Star Barrel, as well as a stairway holding two Neeks. A gap in the ship is ahead, but the Kongs can jump into it to find special items. On the other side of the gap, there is a Klobber and the letter N. These are followed by a tall pile of barrels with Klomps stomping around them. The Rambi Crate is on top of the barrels. More bananas in the formation of an R are also near here, being followed by stairs that lead down to a trail of Neeks. Many barrels that can be stood on are piled up ahead in a lower part of the ship. Bananas in the formation of an arrow are in front of them. Neeks march in the area ahead of here in front of some large barrels that can be jumped on to reach the Video Game Hero Coin. There is a stairway after here that can be walked up to reach two Klomps, one of which stands on a few large barrels. Two more over-sized barrels are ahead with a Klobber on them. They can help the heroes jump to a raised part of the ship, where a No Animal Sign can be found. It can make Rambi disappear if he is in use. A barrel is found, which helps the Kongs land on the End of Level Target and receive a prize, either a Banana Bunch, Banana Coin, or a Red Balloon. After landing on the target, the Kongs exit the level and head to Mainbrace Mayhem. 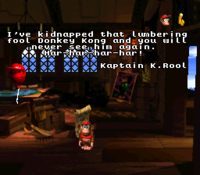