Slime Climb is the fifteenth level of Donkey Kong Country 2: Diddy's Kong Quest and the fifth level of Krem Quay. It is another vertical rigging level, just like Mainbrace Mayhem and Topsail Trouble from the first world, Gangplank Galleon. Slime Climb has rising water which has the rare, invincible enemy, Snapjaw, who follows Diddy and Dixie Kong throughout the level. The Kongs must avoid getting into the water or else the Snapjaw charges at them and bites them. Many other types of enemies appear in the level, the two most common being Flitters and Click-Clacks.

There are two Exclamation Point Barrels, which temporarily protects the Kongs from being hurt by Snapjaw while they are underwater. The first Exclamation Point Barrel is required for the Kongs to safely enter the first Bonus Level underwater, and the second one is required for them to safely collect the Video Game Hero Coin at the end (in the Game Boy Advance version, they can also collect the golden feather this way). 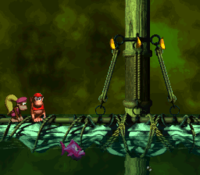 Diddy Kong stands at the beginning of the level.

The Kongs begin the level on a yard that is positioned above the water but under a trio of bananas. Two more yards are ahead of here: The first holds a single Click-Clack, and the other carries two. A Banana Coin is between the two yards, and a super-jump or a team up move is required to reach it without falling into the water because of its location. The third yard in this area is also placed under some ropes with an arrow formed by bananas on it. They must climb upwards with these ropes, as directed by the arrow, in order to reach some higher yards that hold a Click-Clack and a DK Barrel. As they climb the ropes, the water rises, but then stops when they get on the yards. There are three smaller yards to the left of here, and as the heroes travel along with them, the water rises again. The first two yards hold one Click-Clack each, and the second one also holds a Kruncha.

The letter K floats between the first two of the three yards as well, but it can only be grabbed with a super-jump or a team up move if the primates do not want to fall into the water. Some ropes are in front of the third yard, and they can be climbed to reach some platforms placed around some masts. Before the water rises too much, they must travel to the east by jumping from one platform to the next. One of the platforms holds a Klomp, and a Banana Coin is after this platform in a gap. Soon, the duo reaches a small yard with a Kruncha on it. Some more platforms attached to the sides of masts are to the left of here, and the heroes must use them to climb higher. As they jump from one platform to the next, a trio of Klomps try to impede in their progress; they also come up to a crate as they head across the area. Fortunately, the water ceases to rise as they move along these platforms. However, it begins to rise again soon after when they reach a nearby set of ropes, which hold a Klinger and an arrow pointing upwards that is formed by bananas.

If the primates climb to the top of these ropes, they can find a straight tightrope to their right and a yard above this, which they can jump from to reach a hidden Blast Barrel. This barrel can shoot them through a shortcut, into the letter O, and onto some yards found shortly before the Star Barrel. If the two friends climb along the tightrope to their right in the area under the Blast Barrel, they come past a Zinger and onto a larger set of ropes that hold a few Klingers. A DK Barrel is to the right of the ropes, which can lead the Kongs up to a separate group of ropes that are positioned to the right of the letter O. A Klinger also slides along these ropes, which can help them climb to a group of yards that support a pair of Click-Clacks. When the heroes reach this area, the water rises under the yards and stops. A Blast Barrel is hidden high in the air to the left of here, and it can shoot the primates to many bananas, and then into an additional Blast Barrel that immediately blasts them to the Star Barrel on a different yard. If the Kongs head to the right from the location of the previous yard, which holds the two Click-Clacks, they can reach the yard with the Star Barrel above it. A Banana Bunch is hidden in a gap to the left of it. 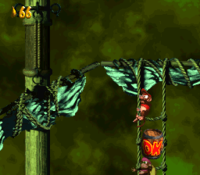 The Kongs climb up some ropes and progress to a yard.

If the Kongs head east from the Star Barrel, they reach a separate yard that holds a Kannon, who stands in front of an Exclamation Point Barrel. Some ropes hang above it, and as they climb to the top of them, they break through a DK Barrel and the water begins to rise again. The ropes lead onto a yard that is placed near a tilted yard that they must travel down to reach a more leveled yard with a Neek on it and a Flitter and a Banana Bunch above it. An angled yard is just ahead, and it must be traveled along to reach another yard that is tilted upwards. A gap is between the yards, and a Banana Coin is located in it. After they cross this gap, they reach the tilted yard, which is positioned next to a leveled yard with Click-Clacks on it. Some ropes dangle above these yards, and as they are climbed, the primates must watch out for a Zinger. Shortly after passing this foe, they reach a higher yard with a gap to the right of it. In order to cross this gap and reach the large set of ropes after it, they must either hover with Dixie's Helicopter Spin or use a Flitter in the gap to bounce onto them.

The ropes hold a pair of Klingers, who climb up and then slide down on them. An additional Flitter is to the right of here, and the primates can bounce on it to cross a small gap and reach a yard that is tilted upwards. As they reach the end of the yard, they discover a smaller and leveled yard with a Click-Clack on it. There are some ropes above here that they must climb on order to progress. A Zinger flies in their way as they head up the ropes. At the top of the rope set, they can find another set of ropes to the left of them, which they must jump to if they want to escape from the rising water. The letter N is at the bottom of these ropes, which a Zinger flies over. They can find an additional set of ropes to the right of here, but a Zinger moves between the two rope sets. After the heroes pass this foe and reach the ropes, they must climb upwards past a pair of Zingers in order to reach a straight tightrope that they must climb along to find a wide gap with some Flitters above it. They must bounce on these moving Flitters to cross. 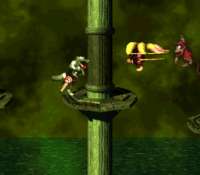 Dixie Kong hovers towards a Klomp on a platform.

As they cross this area, the water ceases to rise, after rising to slightly under the Kongs. On the other side of the gap, they can find some more ropes that they must climb to the top of to make their way onto a large yard with a Banana Bunch-stealing Klobber on it. Before the water reaches the Kongs, they must hurry onto a tilted yard nearby that holds another Banana Bunch-stealing Klobber. If they cross the gap following this yard, they make their way onto another yard that supports a Kruncha. A rope set is above this foe, and the duo must climb to the top of it in order to reach another yard with a smaller yard above it. Once they get on the first yard, the water stops rising, but if they hop onto the yard above it, which holds a kannonball, it starts to climb again. There are four platforms attached to masts ahead of here; three of them hold Klomps, but the last of them supports a Kannon, which they can load with the nearby kannonball. The platforms must be used to progress to a small gap with a Flitter in it. They can use this Flitter to cross the gap and then reach a yard with some ropes above it.

Once they reach the top of these ropes, they jump onto a yard that holds two Click-Clacks, and the water ceases to rise. An Exclamation Point Barrel is hidden in the top-left corner of this area, and if the primates hit it, they become invincible temporarily. They can use this short-lived ability to grab a Video Game Hero Coin hidden under the level's exit in the water. In the Game Boy Advance version of the game, a golden feather is also hidden in the water to the left of the coin. The End of Level Target is on the other side of a gap from the location of the Kongs' location at this point. They can cross this gap by bouncing off of a pair of Flitters that fly in it, and then by accessing a Barrel Cannon that can shoot them onto the nearby yard. This yard holds the End of Level Target, which the Kongs must hit in order to complete the level. If they hit this target immediately after shooting out of the previous Barrel Cannon, they win a prize from it (either a Banana, a Banana Bunch, or a Banana Coin). A Barrel Cannon is placed to the right of the End of Level Target, and it can blast the heroes into the Barrel Cannon placed to the left of it. 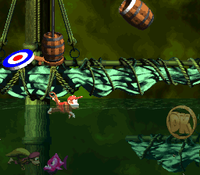 The Kongs find the Video Game Hero Coin, which is beneath the End of Level Target