Web Woods is the twenty-seventh level of Donkey Kong Country 2: Diddy's Kong Quest. It is the fifth and final level of Gloomy Gulch, and is set in a foggy forest. Diddy and Dixie Kong are transformed into Squitter from a small room after the first portion. With the exception of the End of Level Target, the stage portion is the only instance in which the player plays as the Kongs, from a two-floored terrain with numerous Krunchas, Kutlasses, and Neeks. A variety of aerial and land enemies are featured in Web Woods. For most of the level, Squitter must cross over huge pitfalls, which he can only do by creating temporary web platforms. A lot of Zingers and Mini-Neckys appear in the large gaps, but the ground portions usually have Kaboings. Squitter can attack most of the enemies by firing web projectiles at them. In some parts, Squitter must shoot his web platforms upward to pass above the elevated pillars. 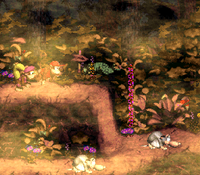 Diddy stands on the edge of a ledge.

The level begins next to a few stair-like platforms that have Neeks on them. A DK Barrel is at the top of the stairs near a high piece of land. The Kongs can climb up to the piece of land to find a crate and a treasure chest containing an item. They also find a pair of Krunchas and a Kutlass here. Some raised land appears behind the area with the Kutlass, holding a Banana Coin. The letter K sits in front of it. If the Kongs do not choose to climb up to the raised area found after the DK Barrel, they can continue along the path to find two Kutlasses. After climbing up some platforms from here, the Kongs head along a pathway to a Neek. A lower area with a hill to the right of it is ahead. The Kongs must move around the hill by traveling along the path to the left, which leads them slightly closer to the foreground. A small ledge is shortly after this path that drops the heroes to another pathway with several Neeks on it. The path leads around the hill to a slightly raised piece of land with a Zinger on it. A Kaboom in a TNT Barrel rests next to the Zinger. 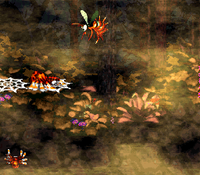 If the Kongs pass the Zinger, they can find a passage in the side of a wall that takes them into an area with an Animal Barrel in it, which transforms them into Squitter. A DK Barrel floats above the Animal Barrel. At this point, Squitter must enter another passage in the side of a wall. The passage takes him into an open area. A gap can be found at the beginning the area, with a Zinger and a Banana Bunch floating in it. Farther ahead, some raised land with a Zinger on it can be seen. A Kutlass waits for Squitter at the bottom of the hill. Using his webs to climb the hill allows Squitter to reach a pathway with several stairs on it. Kaboings bounce all the way up the stairs. An abyss can be found to the right of here with a few Zingers flying throughout it. Two Zingers guard a DK Barrel at the top of a hill that follows this gap, and a smaller abyss can be found after the hill. A Krook stands on a platform on the other side of the gap. Another gap follows the platform, along with another platform on the other side. There is an vertical arrangement of four Zingers above another abyss. Afterward, Squitter lands on the ground, and a green Kaboing bounces off a hill in the center; the DK Barrel and Star Barrel are located below the hill.

If Squitter continues, he reaches another wall of Zingers who float above a wide gap. If Squitter passes them and travels over the gap, he comes up to a few bananas and the letter O. Two more groups of Zingers also appear. A few more platforms are on the other side of the abyss. Soon, Squitter can find a larger abyss ahead of him. A Kloak stands on the platform on the opposite side of the gap. Two more gaps are ahead, with more platforms on the other sides of them. Kannons stand on the two platforms following the gaps. Another pit can be found after the second Kannon, and it has the letter N in it. Some stair-like structures are located on the other side of it, and Mini-Neckys swoop down as Squitter goes down the stairs. The Mini-Neckys continue to attack him as he cross a large gap nearby. A platform can be found on the other side of the abyss with a Kannon on it. More Zingers can be found floating in the gap. A hill is on the other side of the gap, and as soon Squitter drops down it, a Kaboing jumps at him from a hill in the background. A second hill can be found, and it has another Kaboing on it. A Kannon also shoots at Squitter as he progresses along this pathway. A small gap follows here, and once it is crossed, Squitter can find a No Animal Sign. If he crosses it, he is transformed back into the Kongs. The End of Level Target can be found nearby, and the Kongs can blast on it from a Barrel Cannon to win either a Banana, a Banana Bunch, a Banana Coin, or even a Video Game Hero Coin.