Chain Link Chamber is the thirty-second level of Donkey Kong Country 2: Diddy's Kong Quest. It is the fifth level of K. Rool's Keep. It takes place inside a castle, just like Castle Crush and Toxic Tower. This level involves Diddy and Dixie Kong climbing up a series of chains, often paired together in the shape of a grid. Chain Link Chamber is the only castle level that does not have any stage hazards requiring the Kongs to quickly progress through the level. The level also features a handful of enemies: Zingers are the main and most common enemy, and are found flying around the chains throughout. There are also Klingers, who climb and slide down the chains, a few Krooks who toss their hook at Kongs from a distance, and some dark and yellow Klobbers who try ramming into the Kongs as they climb up the level. Depending on the route that they take, Diddy and Dixie may also encounter Mini-Neckys, who also try swooping into them. 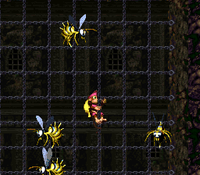 Dixie is trapped between several Zingers.

From the start of the level, the monkeys must climb across a few chains. There are a few Klingers sliding along these chains, though, and they must be avoided at all costs. After this, the Kongs must climb up a longer rope and enter a large chamber of chains. Once they maneuver around the area and avoid all the Klingers lurking about, they have to jump up many chains in the northeast part of the area and dodge several Zingers in their way. Then, the Kongs will have to climb straight up one long rope, while avoiding Krooks hiding in the alcoves nearby, who will throw their sharp hooks at them. Soon, the monkeys will come up to a fork-in-the-road. They can go either left or right, although both sides take them to the same exact point. On the east side, they have to shoot up the area through a few barrels, while on the west side, they must climb up several chains and avoid some Zingers. After choosing a path and completing the obstacles, the heroes must climb up another long chain and enter a large area where they will encounter several Zingers. They will have to move around the foes and continue upwards, only to meet even more Zingers. They Kongs must dodge them all and find the Star Barrel in an alcove to the left.

The Kongs climbing past a Mini-Necky

From that point, the monkeys must keep going up the chains and watch out for Klobbers charging at them. After that, there is another fork-in-the-road that the Kongs must get through. They can go to the left route, where they will have to climb up a long chain and avoid some Mini-Neckys, or they may take the right route, where they must jump up some chains and also avoid a pair of Zingers. Once they get through this part, they should continue upwards and enter another chamber filed with pesky Zingers. After they maneuver around all the enemies, the must climb up two chains. As they climb up, there will be two Kannons shooting at them. They will have to move back and forth to each chain to dodge the falling kannonballs. Once at the top of this chain, the Kongs must climb up some more chains and soon have to face their biggest challenge yet. Eventually, the monkeys will find a pair of Zingers chasing them, and they have to hop up many chains as fast as they can. Soon, they will get to the top of this chain, and have to hop down another chain, still having a couple of Zingers chasing them. The heroes must continue through the level with the foes on their tails for a while longer, until they finally begin to climb a separate rope. When they climb this, Mini-Neckys will be swooping down at them, so they have to act fast. Soon, the group will climb up one of the last chains and watch out for the life sucking Klobber hidden in an alcove. At the top of this chain, they can find the End of Level Target, which rotates between a banana, Banana Bunch, or a Banana Coin for a prize. 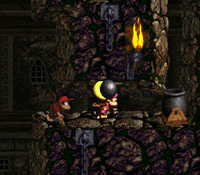 The Kongs heading towards the Kannon that launches them to the first Bonus Area.

The location of the golden feather

The location of the letter K