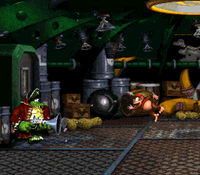 Upon entering the ship, K. Rool is seen attacking the tied-up Donkey Kong with his blunderbuss. Once he notices Diddy and Dixie, Donkey Kong is raised offscreen and K. Rool turns his attention to them. This is only seen the first time the stage is accessed; on repeat playthroughs, the battle begins immediately.

At the start of the fight, K. Rool shoots a kannonball out of his blunderbuss, which the Kongs can pick up. K. Rool will propel himself to the other side of the arena, requiring the Kongs to jump over him, then start using his blunderbuss suction to pull the Kongs toward him. If they are pulled close enough, he will smack the active Kong with the gun, defeating them. The Kongs must throw the kannonball into K. Rool's blunderbuss during its suction. If successful, he will fire it back while it explodes in his face. As the fight goes on, the kannonball will come back out faster. K. Rool will now launch a spiked kannonball onto the middle of the battlefield, then slide across the stage twice. The kannonball's spikes will retract and it can be used to attack K. Rool again, which will make him launch two spiked kannonballs on the floor and slide across the stage three times. Only one of the two kannonballs will lose its spikes. After the third hit, K. Rool will fall over for a brief period, and the tied-up Donkey Kong will reappear, triggering the appearance of a DK Barrel before K. Rool gets back up again. The DK Barrel will disappear if it is not used before K. Rool takes damage again.

Throughout this second phase of the fight, K. Rool will launch nine spiked kannonballs followed by a barrel, which contains a non-spiked kannonball that can be used to attack K. Rool. At first, these kannonballs fly straight, but come out at different heights. Once K. Rool takes a hit, they will start bouncing. Some of them bounce high, some low, and some moderately. After another hit, they will move slowly and circle through the air, with the last six kannonballs coming out two at a time. Once he has taken six hits, K. Rool will fall over again, but just like before, he gets back up and continues fighting. Another DK Barrel will appear, and it, like the last one, only lasts until K. Rool takes another hit. 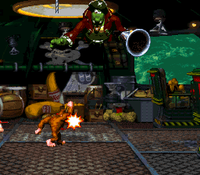 Donkey Kong uppercuts Kaptain K. Rool out through the roof.

K. Rool will now launch three blue gas clouds which freeze the Kongs if they come in contact with them. After that, he will slowly propel himself across the floor, then do it again faster while turning invisible. The Kongs must now jump over him while he is invisible, using the dust he kicks up to tell where he is. A kannonball will appear, and K. Rool can be attacked again. He will start shooting red gas clouds that bounce slightly. These will slow the Kongs down if they touch them. K. Rool will follow that by shooting three spiked kannonballs before another regular kannonball appears. After that, he will shoot slow, rotating, purple gas clouds, which reverse the player's controls. Then, he will start vanishing and reappearing next to the Kongs and attempting to pull them toward him. Once he does this four times, a kannonball will spawn before he reappears again. After nine hits, K. Rool falls over and the Kremkoin is obtained. He gets back up yet again, but this time, Donkey Kong breaks loose and punches him, knocking him out of the Flying Krock. He lands in Krem Quay and ends up in Krocodile Kore.