Fiery Furnace is the fourth level of the Lost World. It can be accessed from the Klubba's Kiosk in Gloomy Gulch. Fiery Furnace is the third and last volcanic level, and the only one not in Crocodile Cauldron. Fiery Furnace has an exclusive type of barrel, Steerable Barrels, which Diddy and Dixie can enter and freely move around inside to move across the long pits of lava. The Kongs can only be in a Steerable Barrel for a few seconds, which upon reaching zero, forcefully blasts out the Kongs and disappears. Because of this, The Kongs must often blast between Steerable Barrels, or fall on a nearby ground. There are numerous Zingers, who are the main enemy in the level, and the Kongs must navigate around them and avoid hitting into them, even while they are inside a Steerable Barrel. Contrary to its lava setting, Fiery Furnace has a Bonus Level that takes place in a bramble area, and it shares a background with that of Screech's Sprint. 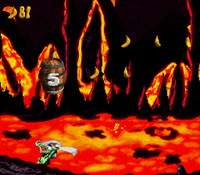 The Kongs are inside a Steerable Barrel, hovering above a green Kutlass

The Steerable Barrel just before firing the Kongs, who must bounce onto the Flitter to enter into the next one

At the start of the level, the Kongs must journey east and defeat some Spinies. Soon, they will come up to the first Steerable Barrel, which should be used to float over a dangerous Kutlass. After that, the heroes will have to climb up a few ledges and dodge several Klampons, until they get to the first large abyss of the level. The Steerable Barrels above it must be used to cross, although the monkeys must be careful, as there is a time limit on them. Once on the other side, they will need to watch out for a few enemies and get into another Steerable Barrel. While watching the time limit, they must maneuver around many Zingers and soon get to the other side. Here, they will have to avoid some more foes, including more Spinies. Eventually, they will bounce off of a Flitter and continue to travel through the barrels. As they shoot to each Steerable Barrel, the monkeys will need to be aided by some Flitters, so they can bounce off of them and get to another barrel. The Kongs are then blasted onto a group of three Flitters, which are positioned diagonally, and they must bounce off them to land into the Star Barrel and fall on the platform below.

Halfway through the level, the heroes will need to dodge or beat a Kutlass and a Krook. Then they must hop aboard another Steerable Barrel and journey across a wide gap. If they can dodge the many Zingers scattered around, they will make it back to land again, and shortly plop right back into another barrel. After they blast their way to the other end of the gap with the many Steerable Barrels, they will have to avoid a few more enemies, including the pesky Cat O' 9 Tails. After passing these foes, the group must get in another barrel and steer their way to the next barrel. Although there is more time than usual on the barrel's limit, the other barrel is a longer distance away, so the monkey must move fast. When they get to land again, they must make a well-timed jump and defeat more Cat O' 9 Tails in their path. From there, they will have to get into more Steerable Barrels and float above a dangerous abyss. This time, many Zingers are moving about to attack the Kongs, but they can be avoided with some good skills. Once on the other side, the Kongs must beat more Cat O' 9 Tails and cross two small abysses, until they finally find the End of Level Target. If they land on it from the Barrel Cannon above (which can only be entered after exiting the Bonus Level), Diddy and Dixie can win either a Banana Bunch, a Banana Coin, or a Green Balloon.