Gangplank Galley is the third level of Donkey Kong Country 2: Diddy's Kong Quest and the third level of the first world, Gangplank Galleon. It is similar to the first level, Pirate Panic, taking place on a wrecked pirate ship, and the sun sets slowly over the course of the level. Neeks and Klomps. Kaboings and Krunchas are the newly introduced enemies in the game, and are the most common enemies in the level. A red Zinger appears in the first Bonus Area. Throughout the level, there are hooks that Diddy and Dixie Kong can grapple on to reach higher areas or to cross wide gaps. Secret items are often hidden on the highly stacked barrels. Aside from the common collectible items, the Kongs can find: KONG Letters, Banana Coin, and even a Bonus Barrel. An Exclamation Point Barrel first appears in this level, located near the end.

The water in the background is green during the sunset. In the Game Boy Advance version, it has a more grayish appearance. 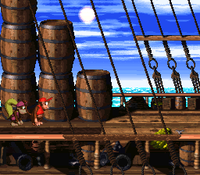 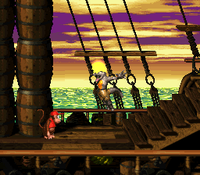 A comparison of the day to evening transitional effect.

The Kongs begin the level in front of a large pile of barrels with a Bonus Barrel on top of them and a few hooks to the right of it that hang above a Banana Bunch and the level's Video Game Hero Coin. In front of the barrels, the primates can find a Kaboing and a pair of ledges with a Klomp between them. A few barrels are stacked up ahead of here that the Kongs can climb on to reach a few bananas and a DK Barrel, which is followed by a small stairway that a few Kaboings hop along. At the top of the stairs, the heroes can find a treasure chest that contains a Banana Bunch. After they travel down an additional stairway, they come up to a few barrel platforms with two Klomps on top of and in front of them. The barrels can be climbed on to aid the heroes in reaching a higher ledge with a hook above it that hangs next to the letter K.

If the primates continue from here, they come down another small stairway with a few Kaboings on it. A pair of barrels is at the bottom of the stairway that can be used to reach a trio of hooks that can be climbed to reach a DK Barrel and the bananas under it. A treasure chest that contains a red Extra Life Balloon is also under the DK Barrel, which is followed by a ledge with a Neek on top of it. The heroes can spot a trail of bananas leading upwards near the rat enemy, and a hidden Barrel Cannon is above it that can shoot them onto a tall stack of barrels. Two more tall piles of barrels are after this stack, and between each of them is a hook with a Banana Bunch or the letter O below it. If the primates do not travel along these barrels, they must instead travel through a lower part of the ship that is full of Kaboings. After they climb out of this lower area, they come up to a Neek and a barrel platform that is followed by a small ledge with a Banana Coin-containing treasure chest at the bottom of it. Once the Kongs climb a small stairway with a Klomp at the top of it, they can discover a Star Barrel. 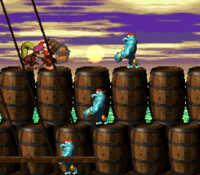 Diddy holding a treasure chest near a Kruncha on top of some barrel platforms.

The primates can find a large set of barrels at the bottom of a stairway located after the Star Barrel. A Kruncha and the letter N are above the barrels, while a Klomp and a DK Barrel are in front of them. After the heroes climb to the top of a nearby stairway that Neeks march along, they come up to a wide abyss that they can cross with the use of a hook floating over it. On the other side of the pit, there is a treasure chest that holds a Banana Bunch. It is followed by a large group of barrels that form two rows. A Kruncha is on each of the rows, and an additional Kruncha marches in front of the barrels. Another wide abyss follows here, and it contains two hooks that the heroes can use to cross it. They can find an Exclamation Point Barrel on the other side of the pit that makes them invincible for a limited amount of time when they hit it.

A stairway follows the barrel that a few Neeks march along. Two pairs of large barrels are ahead of here. While the first pair stands behind a Kruncha and holds a few bananas, the other supports a Kruncha and sits behind some bananas. A Banana Bunch is located to the right of the second barrel pair, and a small stairway with a Kaboing on it is below it. On the bottom of these stairs, the Kongs can find a large stack of barrels that hold a few Krunchas, a treasure chest that holds a red Extra Life Balloon, and two bananas. A Bonus Barrel is also above it. Once the Kongs head past the pile of barrels, they make their way up a set of stairs with a few Kaboings on them and then approach a wide abyss with some hooks above it. Once they cross the pit, they come up to the End of Level Target. If they jump on the target from the ground, they simply complete the level, but if they jump on it from a nearby hook, they complete the level and earn a prize. In the Game Boy Advance version, the Kongs can find three Banana Coins hidden past the End of Level Target. 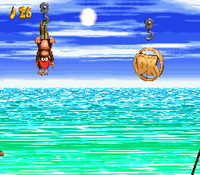