Topsail Trouble is the fifth level of Donkey Kong Country 2: Diddy's Kong Quest and of the first world, Gangplank Galleon. It is the second rigging level after Mainbrace Mayhem. It is another vertical level, where Diddy Kong and Dixie Kong must reach the top. Unlike Mainbrace Mayhem, Topsail Trouble takes place during a rainstorm. Rattly makes his first appearance in the level, and his animal crate is at the very start. The Kongs can optionally ride Rattly for the first half, up until the No Animal Sign, and make use of his high jumping ability to travel higher more easily. If they do not ride Rattly, the Kongs must jump from hooks to move between platforms and masts. During the second half, the Kongs must climb up horizontal and vertical ropes while avoiding enemies, especially Zingers. 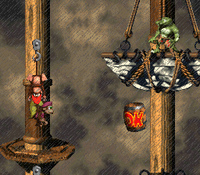 Diddy hangs on a hook near the beginning of the level.

The Kongs begin the level on a short yard next to an animal crate that contains Rattly. Two rows of bananas are above the heroes in this area. If they travel ahead from here, they reach a longer yard with a pair of Neeks and a Kaboing on it. The letter K hovers above the yard, which is followed by another yard that is connected to a large mast with some platforms on it that the heroes can use to climb. If they do not have Rattly to help them head up the platforms, they can instead use a hook between the structures on the mast. Once the primates reach the second level of yards, they can find a higher part of the previous mast with a red Extra Life Balloon above it. A DK Barrel also sits on the first yard in this area, which also holds a Click-Clack. There are two smaller yards ahead of here that are both tilted and hold a Click-Clack. The Kongs can find a mast sticking out from behind the last of these yards that holds a few round structures. They can use the platforms on the masts and a hook to climb to the third level of yards, where there is a small, tilted yard that is held by a mast with a Bonus Barrel above it.

The primates can find three leveled yards ahead of here, and the first two of them hold Kaboings. The last of the yards is held under a DK Barrel, which a hook can be found next to. Another hook is after this yard with a group of bananas under it that form the letter R. A large mast with some wooden platforms on it is behind the hook and the bananas, and they can use it to climb to the next level of yards. When they reach the first yard, they can find the letter O above them. A hook is next to it, along with a strong mast with a platform on it that supports a treasure chest, which contains a red Extra Life Balloon. The heroes can find an additional structure above them on the mast that they can reach with either a nearby hook or Rattly. If they head west from the platform, they come up to a small yard with a Kruncha on it and then a platform on a mast, which is located under a Blast Barrel. This barrel can blast them onto a higher yard with a crate and a No Animal Sign on it, which makes Rattly disappear when it is passed. The Kongs also earn a Banana Coin if they lead Rattly to this sign. Just before the sign, they can find a platform on the top of a mast, which is structured under another Banana Coin. If the two friends continue from here, they soon reach a Star Barrel. 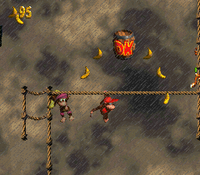 Diddy and Dixie move across a horizontal rope, with a DK Barrel located above.

A long set of ropes with a Zinger and a Banana Bunch at the beginning of it is located after the yard found under the Star Barrel. As the heroes head to the east with these ropes, they come under a few bananas with a DK Barrel among them. Some more ropes that can be climbed to travel upwards are ahead of here, and the first Klinger in the level climbs along them. A rope leading to the west is at the top of these ropes that is positioned slightly above a Zinger. If they pass this wasp foe, they come along a set of ropes that lead higher up. A Klinger climbs along the ropes, which is placed next to a hidden yard with a golden feather (exclusive to the Game Boy Advance version) and a Banana Bunch on it. The heroes can find another yard farther up at the top of the ropes. This yard holds a small crate and is structured under a Flitter with some bananas above it. Some ropes are under this yard that the Kongs can climb down to find the letter N being guarded by a Zinger. As the primates travel upwards with the ropes, they come up to a Zinger that flies close to an invisible Banana Coin and then a horizontal tightrope with another Zinger in front of it. A DK Barrel is above the Zinger, and a pair of Flitters are above the rope. The heroes can bounce on them to reach a hidden Bonus Barrel, which is positioned under a yard that Diddy and Dixie are sent too after playing in the second Bonus Level.

If the primates continue along the aforementioned tightrope, they climb towards a pair of Zingers that block their path. After they are passed, the heroes come up to some more ropes that lead upwards past a Klinger. A horizontal rope is to the left of the top of these ropes, and a Zinger flies around it. Some more ropes leading upwards are soon after the Zinger, and as they are climbed, the duo can find a yard to their right that holds the hidden Video Game Hero Coin. If they continue along the ropes, they come up to a horizontal rope with three Zingers all the way across it. Once they dodge all of the foes, they can find more ropes that can help them continue upwards. Once they climb the ropes, they reach another horizontal rope that is guarded by two Zingers, one of which that is stationary. In the Game Boy Advance version of the game, a few hooks are hidden to the left of this rope that can help the heroes reach a yard positioned high in the air. It supports a lone Click-Clack, who is in possession of a photograph. If the primates pass the previously-mentioned Zingers, they reach a yard with an End of Level Target on it, which they can jump on to complete the level successfully. If they jump on the target from the nearby ropes, they can win a prize, either the letter G, a Banana Bunch, or a Banana Coin. Beyond the target, the Kongs can find a Crate and a blue Extra Life Balloon; they must be quick to obtain the balloon because it floats away quickly.