Mudhole Marsh, named the Swamp Level on one occasion,[1] is the twenty-first level of Donkey Kong Country 2: Diddy's Kong Quest. It is also the fifth level of Krazy Kremland. It takes place in a swamp just outside the exit of the Kremland amusement park. It is the only swamp level to not appear in Krem Quay, and the last one overall in the game. Elements from previous swamp levels return in Mudhole Marsh. There are many gaps for Diddy Kong and Dixie Kong to cross throughout the level. Throughout the level, the Kongs use numerous ways to get across the gaps: by jumping from Krockheads, lilypad platforms, barrel platforms, cattails, Flitters, or even barrels shot by Kannons. Aside from Flitters, there are two other types of aerial enemies: Zingers and Mini-Neckys. When on land, the Kongs must go across moss-covered piers, where they encounter Cat O' 9 Tails: these enemies can fling them up to collectible items and, in one instance, a Bonus Barrel. 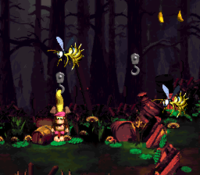 The Kongs hang on a hook around Zingers.

The level begins on a grassy bridge that is held over the swamp water. Three Flitters attack the heroes as they walk across this area, but they can use the enemies to their advantage by jumping on them to reach a Banana Coin. A water area is ahead that they must cross by using half-sunken barrels and lily pads. A hook floats in the air above the objects. As the Kongs approach land again, Flitters attack them and they meet the first Cat O' 9 Tails in the game. It can throw them to the letter K or harm them. Another gap full of water is ahead that must be crossed with the hooks floating above it. Click-Clacks walk along a small platform ahead of here. There is another water section after this platform that can be crossed if the Kongs jump along the lily pads and half-sunken barrels in it. Mini-Neckys attack them as they cross, diving at them. A treasure chest containing a Banana Bunch is on the first lily pad as well.

Once the Kongs cross the water area, they reach another small platform supported over the swamp. It has a Cat O' 9 Tails on it. Using more hooks, the primates can cross most of a long section of water after here. Zingers surround some of the hooks. A Flitter is also after one of the hooks that must be bounced on to avoid landing in the liquid. Lily pads and barrels must be jumped on throughout the remaining part of the water area once the heroes bounce on this Flitter. As the primates travel down the swamp with the lily pads and barrels, Mini-Neckys swoop down at them. They come up to a DK Barrel and many treasure chests on the way as well. As the heroes approach the end of the water section, they encounter a few Flitters, whom they must bounce on to cross small gaps between lily pads. Once they Kongs cross this water area, they reach another bridge platform supported over the liquid. It has a Cat O' 9 Tails on it, as well as a Bonus Barrel above it. There is another water area just ahead of here, which the heroes begin crossing by bouncing on a Flitter to reach a lily pad. They must continue along the lily pads and the barrels in the water to progress safely. The Star Barrel floats above the first half-sunken barrel in the water. 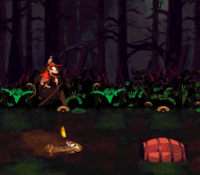 Diddy Kong hops towards a Krockhead.

A single lily pad is located after the special barrel. It is followed by another solid bridge platform. A Cat O' 9 Tails rests here. A pair of Zingers also fly in the air above the platform, guarding a group of bananas. If the Kongs travel forward, they can find another water area with more lily pads and barrels that they need to cross. Vines must also be used in this area to progress. A Kannon is on the first barrel, and the letter N is right in front of it. Three vines follow the foe, allowing the primates to reach a Krockhead that can fling them over a Zinger and onto a platform held above the water. Here, there are two Cat O' 9 Tails, along with a second Zinger, who guards bananas and a Banana Coin. A third Zinger is at the end of the platform at the beginning of another water area. Here, the Kongs must hop along lily pads and barrels to progress. A Kannon shoots at them as they hop along the objects. They pass a DK Barrel and a kannonball on the way across as well. A barrel holding a kannon that can shoot them to a Bonus Level is after the Kannon. Another platform is also immediately after it, and three Click-Clacks march along it. An additional area of water is ahead. After the heroes bounce on a Flitter here to cross a rather large gap, they reach a vine that they can cling onto. Using more vines, lily pads, barrels, and even a Krockhead, they must hop over the gaps in the water area.

After they pass the second Flitter, they reach a large gap that they can cross by bouncing on a barrel shot from a Kannon nearby. A few Flitters are ahead of here that can aid the Kongs in crossing the area. A bridge platform that supports a treasure chest, containing a Banana Bunch, is right after the Kannon enemy. A small gap of water is after it, but only a green Krockhead must be hopped on to cross it. On the other side of the water area, the primates can spot two Cat O' 9 Tails and a few Zingers who fly near the letter G. There is another water area following this. Once they hop along the first lily pad and the first barrel, they find a large gap ahead of them. A Kannon is on the other side of the gap shooting barrels, so the heroes must bounce on its projectiles to cross. A Flitter flies over a gap immediately after the Kannon that the Kongs can bounce on to reach a solid platform with another Kannon on it. An End of Level Target is at the end of this platform. They must jump on it to complete the level. They can win a prize from the target mechanism if they jump on it from one of the barrels shot from the nearby Kannon. The prizes include the Video Game Hero Coin, a Banana Coin, a Banana Bunch or a red Extra Life Balloon. 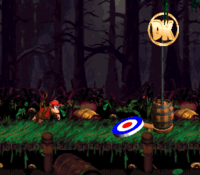