Parrot Chute Panic is the twenty-sixth level of Donkey Kong Country 2: Diddy's Kong Quest and the fourth level of Gloomy Gulch. It is the last Zinger hive level. Here, the Kongs must utilize their Animal Friend, Quawks, to descend the narrow pathways while avoiding numerous Zingers in their path; the level has the most Zingers of the other levels. There are a couple of Quawks in the level: after reaching a point, Quawks drops both Kongs on the ground, and the next Quawks can be found shortly after. Sometimes the Quawks drops the Kongs directly to the next Quawks, who resumes with carrying them down the level. Squawks also appears in both of the level's Bonus Areas, to assist the Kongs in finding the Kremkoin or defeating enemies.

The ground portions are short, straightforward paths that sometimes have a Klampon or a Spiny walking around; one path even has three Click-Clacks. The honey-coated ground from previous hive levels also appear during this part. Parrot Chute Panic's name is a play on "parrot" and "parachute," as a reference to Quawks being a parrot and by slowly taking the Kongs down the level like a parachute. 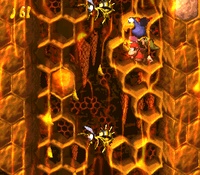 Quawks and the Kongs descend around the first few Zingers at the start.

The level begins on a flat ledge with a gap ahead of it. A DK Barrel wobbles above the gap. If the heroes drop into the gap, they fall past many floating bananas and an alcove containing a Video Game Hero Coin, and then land on another flat surface with some honey splattered on it. The honey is sticky so the Kongs cannot walk through it easily. A Quawks waits for them in a small gap. Once they grab onto the parrot, they slowly descend through a small passage with a few Zingers in the center of it. At the bottom of the passage, the Quawks drops the Kongs, who then land on more honey. A crate lies next to the honey, followed by a Zinger floating in the air and a Klampon who marches along a flat pathway found in a slightly lower area. The crate can be used to break open a nearby wall. If they enter the opening in the wall once they do so, they enter a hidden area with many bananas that form the shape of the Rareware logo. After they travel through the exit of this area, they reach a thin passage that they must drop though to reach the letter K, many bananas, and a Banana Coin, and then land in an area located farther into the level.

A Quawks hovers in a gap near the Klampon to the left of the aforementioned wall. It can pull the heroes into a wider passage with more Zingers around it. Some of these wasp enemies are placed in the center of the passage, while others line the walls. Another letter K is between two of the Zingers in the center of the area. The Quawks soon drops them above a few Zingers that they must avoid. After a small spot of honey, a Zinger can be found. If the heroes drop into the gap next to it, they land in a lower section of the level, where there are two additional Klampons and a DK Barrel. A pair of Zingers surround the third Quawks, who is present nearby. The bird helps them travel through a narrow passage with more Zingers in it. As before, some of the foes line the walls, while others fly in the middle of the area. The primates come past a Banana Coin and some bananas as they descend.

The parrot soon carries them into a narrower passage, which is followed by a wide room with a few more Zinger in it. Two Spinies walk along some sticky honey at the bottom of the room. The letter O is next to them. On the opposite side of the area, a small gap can be found. If they drop into it, they land on a Quawks, who carries them farther down the level, where there are more Zingers. This time, the passage is narrower than usual. A platform can be found in the center of the area with one of the Zingers on it. A Banana Bunch can be found on the right side of the platform, but only a single banana is on the left side. After the heroes fly over a trio of Zingers at the small turn, they Quawks prepares to drop them. Once they let go, they fall past a few ledges and land next to the Star Barrel in a small gap. 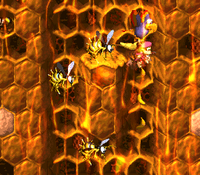 The heroes maneuver around many Zingers.

A Quawks and a DK Barrel are in this gap. The Quawks carries them into a narrow passage, where they must maneuver around Zingers by flying from left to right in the area. The parrot soon drops them on a flat piece of land with a crate on it. Another Quawks is in the air near here over a gap. It can slowly lead the heroes down through the gap, which features some Zingers moving back a forth across the area. Once they pass three Zingers, the Quawks drops them onto a large, flat ledge with a Spiny on it. A gap is near here with the letter N by it. If the Kongs fall into the gap, they land in a slightly lower elevation, where they can find a Quawks in a small gap. This Animal Friend carries them through another narrow passage infested with dangerous Zingers, who are scattered all around. Three platforms are in the center of the area farther down. A trio of bananas are on the one side of the first two platforms, while Zingers wait to attack on the other sides. The third platform has collectibles all around it, although the right side has more valuable items by it.

After the heroes pass these platforms, they ride through narrow turns that have Zingers around them. Soon, the Quawks drops the Kongs past a Zinger and through a narrower passage. An area of land is under here with a Klampon and a DK Barrel on it. A small gap is to the left of here that leads down to a tight passage with three Click-Clacks in it. After dropping off of the ledge near the trio, the Kongs can find a small hill with a gap next to it. A Quawks waits here. This parrot guides the group deeper into the hive, where Zingers line the walls around a few sharp turns. After three turns, the bird drops the heroes into the claws of another Quawks. It pulls them past a small group of Zingers found along the walls and in the middle of the path. A wider area follows here with some Zingers flying back and forth. Another Zinger in this area also flies in a circular path, surrounding the letter G. After passing a few pairs of Zingers floating from left to right, the parrot leads them into a narrow passage and prepares to drop them onto a pile of sticky honey. Once they reach land, they can see the End of Level Target just ahead, rotating between a Banana, Banana Coin, Banana Bunch, and a Red Balloon. If the Kongs jump on the target from a hidden hook to the right, they can win one of these prizes. 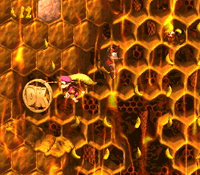 The location of the Video Game Hero Coin. 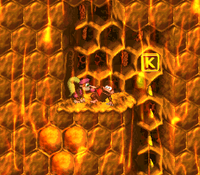 The alternate letter K, found by exiting a room with bananas in the formation of the Rare logo.