Ghostly Grove is the twenty-third level of Donkey Kong Country 2: Diddy's Kong Quest. It is also the first area of Gloomy Gulch. This level is set in an eerie forest and marks first appearance of the ropes. Diddy and Dixie Kong need to time their jumps in order to utilize the ropes to their advantage. They cannot hang onto them long, as the ropes might disappear before they get off, thus making them fall. Aside from ropes, Kabooms also debut in this level. There are a few Krunchas who appear in pairs. Other enemies in the level include Klomps, Kloaks, Klampons, Klobbers, Krunchas, Zingers, Flitters and Spinies. 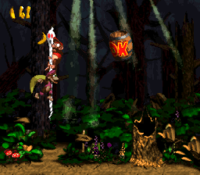 Diddy Kong hangs on a rope at the beginning of the level.

At the beginning of the level, the Kongs can find a Kloak, above themselves that throws items to them. Klomps stomp along the long and rather flat pathway ahead. A rope is on the way down the pathway, and a DK Barrel wobbles next to it. A second rope is above a prickly Spiny found in a small alcove. The rope can be used to reach a higher area of land. There is a small alcove in the ground near here with a Klampon and a Spiny in it. The letter K floats above the dangerous foes. A Klobber also waits in its barrel at the edge of a cliff just ahead. An abyss is next to the Kremling enemy.

A rope floats above it that must be used to cross, and a Banana Coin is also in the gap. On the other side of the gap, a trio of Klampon patrol the area. A wide abyss is after them with a pair of ropes above it, and a Flitter also flies in the gap. If the Kongs cross this and reach land, they can find another Klobber and two mighty Krunchas on raised piece of land. A flat pathway with a Spiny walking along it is ahead at a slightly lower elevation with a rope appearing and disappearing above it. It can be climbed to reach the letter O. After passing a small gap, the heroes approach a Klobber on a platform. Another abyss follows it, but it can only be crossed with the help of a rope. Luckily, one of these ghostly objects is present in the gap, although a Zinger is near it. A barrel and a lone Klobber can be found immediately after the pit. They are located just before a pair of Krunches, who are both found on pieces of land at different elevations. In a higher area of land ahead, another Klobber can be found. The Star Barrel is nearby immediately after a Spiny in a small alcove. 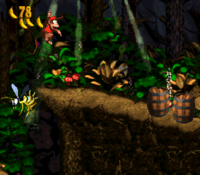 Diddy jumping above a Zinger.

Ahead, the Kongs can find a wobbling DK Barrel in front of a Kloak, who throws Spinies at them. After tossing the enemy, the Kloak leaves, allowing the Kongs to safely progress to an abyss near its previous spot. A rope must be used to cross. A platform with a Kaboom on it is located after this abyss. Another gap is immediately after the foe, and it is filled with ropes, bananas, and a lone Zinger. Once it is crossed, the heroes can reach a large area of land with a Klobber and a Kaboom on it. They hide in barrels in front of a raised piece of ground. A Treasure Chest containing the letter N is here. After crossing a small gap that follows the two Kremling enemies, the heroes find themselves on a large area of land with two Klampons on it. A pair of ropes are in the air above the Klaptrap-like foes, but they do not appear visible for more than a few seconds. They can be used to reach a Bonus Barrel. A wide abyss can be found farther ahead. Two ropes placed in it can assist the duo in crossing. A Zinger stands in their way as they travel over the pit, which is followed by a flat piece of land with two Kabooms on it. A DK Barrel is also here.

Another abyss with more ropes in it follows the Kabooms. The heroes must climb upwards using the ropes to reach a higher platform located immediately after a stationary Zinger. Two Klampons are here that march along some stair-like piece of land. Spinies can be found soon after them under a formation of bananas. The bananas form a circle, which has the invisible letter G within it. Another large pit is ahead, but it can be crossed with the help from a trio of ropes. A Zinger is after each of the ghostly beings. A small platform is present at the opposite side of the gap. Here, a Kloak can be found floating over another abyss. After it hurls a single barrel at the Kongs, it floats away. Five ropes are located in the large gap that this Kloak is found above. They can aid the heroes in crossing the gap. If the two friends manage to cross, they can find the End of Level Target on a solid piece of land. If they land on it, the level is completed. If they jump on the target from the final rope in the level, they win a prize. 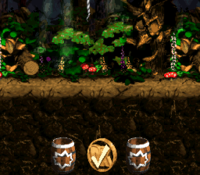