Krockhead Klamber is the thirteenth level of Donkey Kong Country 2: Diddy's Kong Quest and the third area of Krem Quay. It is the second swamp level, after Barrel Bayou. Diddy Kong and Dixie Kong have to quickly cross the swampy water by jumping from many Krockheads. Many of the Krockheads have a pattern of emerging for a few seconds, then retreating into the water, and then coming back out. Some Krockheads only appear when the Kongs jump at a Krockhead Barrel; likewise, these Krockheads also retreat back into the water, though they can only be brought back if Diddy and Dixie jump at the Krockhead Barrel again.

The swamp has many cattail plants, which Diddy and Dixie can grab onto, and large barrel platforms partially submerged in the swamp. There are also many Flitters that the Kongs must jump from. Aside from Flitters, there are also Zingers, Klingers, and Kaboings that appear in the level. Squitter the Spider appears in a Bonus Level, though he cannot continue with the Kongs in the main level due to the No Animal Sign that appears just outside the Bonus Barrel. 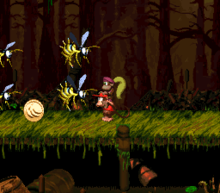 The Kongs begin the level in front of a pair of Zingers, who they can travel over with their team up move in order to reach a hidden area that consists of a treasure chest containing a Life Balloon and a pit with a few Zingers and a Flitter above it. With their super-jump ability, the heroes can cross the pit to reach a platform that holds an arrow pointing to the left that is formed by bananas, which is followed by two more of groups of two Zingers that they must pass. A Banana Coin is between the two groups, and a treasure chest containing a Video Game Hero Coin follows them. There is also a Blast Barrel above the previous pit, and the primates can enter it to be shot back to the beginning of the level. In the Game Boy Advance version, the area's location was made more obvious to the player. In the original version, the Zingers are not heard or shown unless the Kongs look to the left.

If Diddy and Dixie head to the right from the starting point on the level, instead of traveling over the Zingers behind them, they come up to a DK Barrel that is guarded by a yellow Kutlass. A large area of water is ahead of here, and a pair of vines with a Flitter between them float on it. Some platforms that float at the surface of the water are also ahead of here; the first platform holds some bananas, the second carries a crate, and the third supports a hopping Kaboing. The first two of the platforms are separated by a wide gap, but the Kongs can cross this gap by bouncing on a Flitter that flies over it. Once the heroes cross the platform with the Kaboing on it, they reach another two vines that surround a Flitter, who orbits the letter K. Two more solid platforms follow these vines, and both of them support Kaboings. If the primates manage to pass these foes and travel ahead, they reach a vine that is guarded by a Zinger. 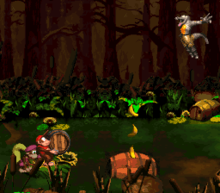 Diddy Kong holds the second DK Barrel in the level

A quadruplet of Flitters are present near here, and one of them hovers over a Banana Coin. Diddy and Dixie must bounce on the insects in order to cross a portion of the swamp and reach an additional vine that is followed by some solid platforms. The first platform holds a DK Barrel, while the two ahead of it are jumped on by a Kaboing, who jumps back and forth with the two platforms. A Flitter also hovers over the third platform. Once the primates travel past this platform, they grab onto a vine that is followed by a Flitter, who is surrounded by a Zinger. While dodging the restless Zinger, they can bounce on the Flitter in order to reach another vine. An additional vine is ahead of it, and a Krockhead with the letter O above its head is between them. The Kongs can discover a third vine after here, and a Flitter being orbited by a Zinger is to the left of it. To the right of the vine, the primates can find a Flitter with a Zinger next to it and the final vine before the Star Barrel, which hovers nearby above a Krockhead.

A long, solid area of land is ahead of here, and a Blast Barrel that can shoot them straight up into the air is next to it. The area of land holds a yellow Kutlass and a No Animal Sign with Squitter pictured on it. An arrow formed by bananas is also above the sign, and it points towards a hidden Bonus Barrel. If this is entered, the heroes reach a Bonus Level that contains Squitter. If they exit the bonus with Squitter and pass the No Animal Sign, the spider disappears and they are given a Life Balloon. If the duo continues from here, they reach a Krockhead Barrel that causes the two Krockheads in the water area nearby to stick their heads out. They must use the crocodiles to reach a pair of vines with a Banana Coin guarded by a Zinger between them. A DK Barrel is to the left of the first vine. After the primates pass the second vine and dodge a Zinger in mid-air, they land on a solid platform with a Krockhead Barrel and, in the Game Boy Advance version only, a golden feather above it. A Zinger hovers over the barrel and the feather. 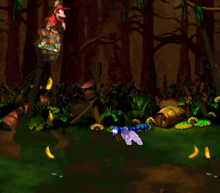 If they hit the barrel, four Krockheads emerge from the water. The Kongs can use these nearby creatures to reach a vine that they can use to reach a solid platform that a Zinger guards. An additional platform follows here, and it holds a small crate that they can defeat enemies with. If the two friends continue from here, they reach a vine with a Klinger on it and another Krockhead Barrel that floats above the dangerous water. After they hit the barrel, a Krockhead appears under them. Some more Krockheads are ahead of here that appear after the barrel is touched, and a Flitter is between every two Krockheads. The letter N is also between the second and third Krockheads in the area. Soon, the primates reach a solid platform with a DK Barrel high above it. They can only reach the barrel if they use their team up move or jump to it from the vine found to the right, which holds a Klinger.

Another vine with a Klinger on it is near here, and it is followed by a quadruplet of Flitters that the heroes must bounce on to cross a small portion of the water area. The two friends can find a pair of vines after the section of Flitters, and one of these vines holds a Klinger. A Krockhead Barrel floats above the water next to the vines, and once it is touched, some Krockheads appear ahead above the water. Two of these Krockheads are guarded by Zingers, and a red Krockhead follows them that can fling the Kongs to a Krockhead Barrel located nearby. After they hit it, some more Krockheads appear, who can enable them to cross a portion of the water area and reach a pair of vines with a solid section of land next to them. An End of Level Target is on this land area, and a Zinger floats above it. If they hit the target, the level is completed; they can also win a prize from the target if they jump on it from the top of the previous vine. The prizes include a banana, a Banana Bunch, or the letter G. 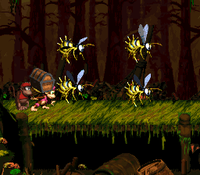