Squawks's Shaft, misspelled as Squawk's Shaft in a Nintendo Magazine System (UK) issue,[1] is the tenth level of Donkey Kong Country 2: Diddy's Kong Quest and the fifth and last regular level of Crocodile Cauldron. The level takes place in a mine shaft. As its name suggests, Squawks's Shaft features Squawks the Parrot, who makes his in-game level debut. During the first half of the level, Diddy Kong and Dixie Kong must blast through many Barrel Cannons. In the second half, the Kongs must ride Squawks. Squawks's Shaft is the first level to have Krooks, who are one of the most common enemies in the level, aside from Zingers. 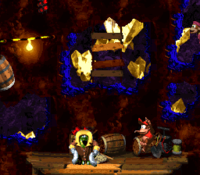 The Kongs prepare to shoot out of a Barrel Cannon.

The Kongs begin the level on a platform next to a Treasure Chest that contains the letter K. A raised platform is ahead of here that holds a Krook, who stands under a trio of bananas. At the edge of the starting platform, the heroes can find a Banana Coin with a platform above it that holds a Klomp. They can find a Barrel Cannon above here that they can aim to blast them towards a few small platforms that they must climb to reach a long platform, which supports three Klomps and a DK Barrel. Two more platforms are to the left of here, and they both hold Krooks. A Banana Bunch is to the left of the second platform, which stands below a Barrel Cannon that can blast the heroes to a group of three platforms. They must climb to the top platform to find another trio of Klomps and a Barrel Cannon. If the primates roll-jump to the right of here, they can find a hidden Barrel Cannon that can fire them into another Barrel Cannon that is surrounded by Zingers and a Bonus Barrel.

If the Kongs blast through the non-hidden Barrel Cannon, they can reach an additional barrel, which is able to blast them onto a long platform with a slightly smaller platform above it. Krooks are on the ends of both of these platforms, and the Krook on the lower platform guards a Banana Bunch and a Treasure Chest that contains a red Extra Life Balloon. A smaller platform is located to the left of these enemies, and a Dixie Barrel is above it that can blast the heroes towards some more Barrel Cannons. These cannons can shoot them into many bananas, two Banana Coins, and, in the Game Boy Advance version of the game, a golden feather. If the heroes travel east from here, they reach a Barrel Cannon that they must aim to blast them upwards, where there are two more cannons that they must shoot through to progress. As they blast between the last two of these barrels, a Zinger tries to get in their way and flies back and forth between them in a horizontal path. The third barrel in this area is able to blast the two friends to a pair of small platforms that carry one Klampon each. A Barrel Cannon floats next to the platforms, and it can blast the heroes towards several more Barrel Cannons. As they shoot through these barrels, they come up to a Zinger that they must avoid and many bananas. Eventually, they make their way onto a platform with a Star Barrel above it and a Blast Barrel that can blast them to a Bonus Barrel to the left of it. 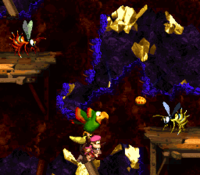 Squawks shoots an egg at a Zinger.

To the right of here, the duo can find a small platform with a Barrel Cannon above it. The cannon is able to shoot them past a pair of Zingers that move parallel to each other and then to another Barrel Cannon, which can then send them to a platform. This platform supports a Krook, who guards the letter O. An additional platform is to the left of here, and it holds an Animal Crate that contains Squawks the Parrot. After the heroes free the parrot, they must grab onto to him so that the bird can lift them through the remaining part of the level. As the heroes begin to ascend, they come up to a DK Barrel in a small gap between two platforms. Above these platforms, the heroes can find a group of bananas that form the letter Y (or the letter B in the Game Boy Advance version of the game). Some more platforms stick out of the side of the area on the way up this part of the level; the first platform holds a yellow Zinger, the second holds a red Zinger, and the third carries a Krook. These three platforms are followed by a group of Zingers that consist of two stationary red Zingers that float under the letter N and two yellow Zingers that hover next to their allies. Three additional platforms are above here, and they all hold one Krook each. A DK Barrel is located just above the third platform, and it is followed by a few Mini-Neckys that swoop down at the heroes to attack. After the group passes these small vulture enemies, they come up to four platforms that stick out of the wall. Two of these platforms, which are positioned across from each other, hold Krooks that both throw their hooks at the heroes. To the right of these Krooks, the heroes can find a Banana Coin and a hidden area that contains another Krook on a platform, two groups of bananas that form arrows pointing upwards, a Bonus Barrel, and a Video Game Hero Coin. If the Kongs and Squawks continue upwards from the location of the previous two Krooks, they reach a platform with a Kannon on it. The heroes must pass under this enemy to progress, but as they do so, they must watch out for the kannonballs it shoots at them. Once the group passes this foe and heads farther upwards, they reach a pair of red Zingers moving back and forth in a horizontal path around a Banana Bunch. A few more Mini-Neckys are ahead of here, and once the trio continues past them, they reach long platform that holds a No Animal Sign. If they pass the sign, Squawks disappears and they are given a Banana Bunch. An End of Level Target is near here, and the Kongs must jump on it to complete the level successfully. Additionally, the Kongs can win a prize from the target if they hit it immediately after shooting out of a Barrel Cannon. The prizes consist of either a banana, a Banana Bunch, a Banana Coin, or the letter G.