Screech's Sprint is the thirty-fourth level of Donkey Kong Country 2: Diddy's Kong Quest. It is the only regular level of The Flying Krock and the final level of the game, not including those from the Lost World. It takes place in between a series of brambles. The first half of Screech's Sprint is similar to other bramble levels, as Diddy and Dixie Kong must climb vines and dodge brambles. Most of the enemies appear during the first half, and most of them are only in a specific location rather than dispersed throughout the level. Here, a few Cat O' 9 Tails attempt to throw the Kongs up into the brambles, and a Kloak throws a Kaboom near the start, just before the group of four Klingers, each sliding down a vine near the start. There is also a group of seven Mini-Neckys try swooping down into the Kongs. Zingers are the most common enemy, and appear in both their yellow and red varieties throughout both parts of the level.

In the second half, just below the Star Barrel, is a Squawks Animal Barrel. Right after transforming into Squawks, he must participate in a race against Screech for the remainder of the level. While racing, Squawks must carefully navigate through the brambles and Zingers (including their red counterpart). While Squawks can flap faster than Screech, he is vulnerable to the Zingers unlike Screech. Contrarily, this slows Squawks from progressing but not Screech. Squawks is required to win the race, otherwise he loses a life. Squawks can make use of a few shortcuts throughout the race to help him reach the finish line before Screech does. In the Game Boy Advance remake, a timer appears on the screen during the race. 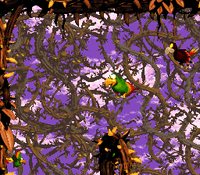 Squawks takes the lead in a race against Screech

From the start of the level, the Kongs must cross a small gap and defeat a Cat O' 9 Tails. Then, they need to cartwheel-jump across another gap and later dodge a Kloak, and deal with the Kaboom it throws. Once the foe floats away, they should carefully jump over the brambles and cling onto some ropes, with Klingers on them. Without hitting the Kremlings, the heroes must climb across all the ropes and get to the next platform. After that, they must hop over more brambles and climb across another vine, while moving past a group of four Zingers. Then, they should let go of the rope and pass two Cat O' 9 Tails. After that, the monkeys must cling onto a vine and climb up, but while watching out for several Mini-Neckys that will swoop down at them. At the top, the will have to leap to the platform to the left hand side and begin to jump platform to platform over the brambles. Eventually, they will come up to the Star Barrel, as well as an Animal Barrel that will turn them into Squawks.

Halfway through the level, Squawks will meet up with Screech, and shortly after, race him. When the race begins, Squawks will have to hurry west and then survive the twists and turns of the bramble surrounded track. Alternatively, just after the race starts, just before Squawks goes up, he can instead go low and to the left, and land into an invisible Barrel Cannon between some thorns that will fire to the left and upwards. By taking the usual path, Squawks needs to travel a far distance north and then turn east, beating all the Zingers in his path. After that, he must follow the banana arrow pointing south. The parrot will come up to many twists and turns in the track shortly after going here, and get through what seems to be a maze between many, many brambles. Using the banana trail for help, the bird should make his way out of the maze to avoid trouble, and then move east again. Once Squawks defeats all the Zingers in the way here, he must zig-zag his way up north, and then turn west shortly after. While he travels in this area, he will have to maneuver around several red Zingers, who cannot be defeated. At the end of this path, the parrot must continue through and fly north between the sharp brambles. After getting through this narrow passageway, he should quickly beat some Zingers and cross the finish line. If he is able to beat Screech, he may continue through the level, and cross the No Animal Sign, turning him back into the Kongs. The Kongs can continue forward to the End of Level Target, which has either a Banana Bunch, a red Extra Life Balloon, or a green Extra Life Balloon for a prize. 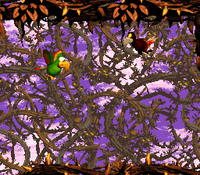 A bug causing Screech to stop at the starting point
Retrieved from "https://www.mariowiki.com/index.php?title=Screech%27s_Sprint_(Donkey_Kong_Country_2:_Diddy%27s_Kong_Quest)&oldid=3799891"
Categories: