Lockjaw's Locker is the fourth level in Donkey Kong Country 2: Diddy's Kong Quest. It is also the fourth level of the first world, Gangplank Galleon. It is the first underwater level of the game. As such, it is also the first level with underwater enemies, such as Flotsams, Lockjaws, and Shuris. Lockjaw's Locker takes place in a flooded ship cargo. Similar to Coral Capers of Donkey Kong Country, which is also the first underwater level and fourth level of that game, there are two animal crates containing Enguarde. While Enguarde is not required for completing the level, he does assist Diddy Kong and Dixie Kong with defeating underwater foes, and is required to enter Lockjaw Locker's single Bonus Area. There are items such as bananas placed between the walls, and the Kongs can optionally swim to them through hidden paths to obtain them. 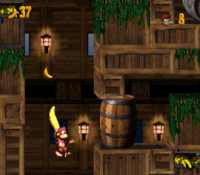 When the Kongs begin the level, they find themselves falling downwards between many large crates and barrels in the ship's cargo hold. As they fall, they come up to a long, curvy trail of bananas, until they eventually land on some solid crates that they can walk along. If they press to the right against the wall as they fall, they can also access a hidden passage containing two Banana Coins and a Banana Bunch. Once the Kongs reach the ground area, they can find a Klomp ahead of them, who walks near an alcove full of water and some bananas. On the other side of the alcove, they can find a DK Barrel and two Klomps that march on a crate and a treasure chest full of banana peels. A wider alcove full of water is ahead of here with the letter K and a Flotsam above it. A Banana Bunch also hovers over the water. Once they cross the alcove, the water begins to rise, allowing them to travel upwards over a higher piece of sunken luggage. As they swim through this area, they come past a few Flotsams and a Lockjaw, who are followed by a line of bananas and another DK Barrel.

A hidden passage between some crates is also in this area, and it contains a long trail of bananas and two Banana Coins. There is another hidden passage under a crate found below the aforementioned DK Barrel, and if the primates swim through it, they can find a room containing an animal crate with Enguarde inside of it. An additional area is above the DK Barrel as well that contains a group of bananas that form the letter A and the entrance to a Bonus Level. If the primates travel forward from the DK Barrel, they come up to some more Flotsams and another Lockjaw, whom the letter O can be found under amongst some bananas in an alcove. After they pass this foe, they find a pathway leading upwards past a few Flotsams that swim in a horizontal path across the area. At the top this pathway, the water begins to lower. A No Animal Sign sits on some of the luggage to the left of here, and the primates can only get Enguarde over to it if they swim towards it before the water becomes too shallow. Otherwise, they have to dismount from the helper and continue past the sign on foot. If they manage to reach the sign with the swordfish, the helper disappears and they are given a red Extra Life Balloon. An area full of water follows the sign, and if the Kongs swim to the bottom of it, they can find a Star Barrel. 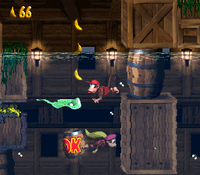 The Kongs swim past a Flotsam

After the two friends pass the Star Barrel, they find a passage leading upwards past a DK Barrel and a Flotsam. As they continue past the Flotsam, the water begins to rise again, allowing them to travel higher into a wide area with the letter N in the corner of it. If they head west from the letter N, they come past a Shuri and then past a few Flotsams. Another Shuri follows these enemies, and if the primates feel along the ground below it, they can find a hidden passage on the other side of the crates that contains many bananas and two Banana Coins. A room containing another animal crate with Enguarde is at the end of this passage, along with a single Lockjaw. If the heroes head north from the aforementioned Shuri, they come up to a trail of bananas and past a few Flotsams to reach a wide area full of Lockjaws. An alcove is above the first Lockjaw that contains several bananas and the letter G.

In a lower part of the area, they can also find more bananas and a Banana Coin in some alcoves. Once the heroes travel past all of the Lockjaws, they come through a wide passage containing a few Shuris and then access a large area, where the water begins to lower. They can find a hidden area above some crates containing many bananas and a Video Game Hero Coin if they quickly travel to the east before the water lowers too much. If they do not reach this section of the level, the water lowers them down to a passage that contains a few Flotsams. After passing the foes, the group reaches a No Animal Sign on top of some large barrels. If the sign is reached with Enguarde, who disappears before passing it, they are given a Banana Bunch. An End of Level Target is ahead of here, and the Kongs successfully complete the level when it is hit. If they shoot to the target from a nearby Barrel Cannon, they win a prize after completing the level. The prizes include a Banana Bunch, red Extra Life Balloon, or a Banana Coin. 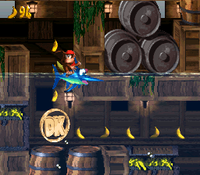 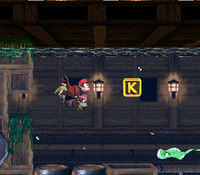 Location of the letter K