Klobber Karnage is the third level of the Lost World in Donkey Kong Country 2: Diddy's Kong Quest. It can be accessed from the Klubba's Kiosk of Krazy Kremland after paying 15 Kremkoins.Every type of Klobber is featured in this level, including the green, yellow, and black ones, and their explosive variant, Kabooms. These enemies often appear in groups, attempting to push the Kongs into nearby pits or spikes. Many pits and large spikes appear in the level, and the only way for Diddy and Dixie Kong to cross them is by using Barrel Cannons. Near the end, the Kongs begin using Rotatable Barrels (on a short timer) for crossing pits. Numerous red and yellow Zingers are patrolling above the pitfalls, and about three times more of them appear in the level than Klobbers.

At the start of the level, the Kongs must travel along the level and dodge a few Klobbers. Then, they will have to cross several large spike-filled pits. After they cross these gaps, the Kongs must face more Klobbers, including yellow banana-stealing ones. Next, the heroes must jump in either the Diddy or Dixie barrel to be launched to a set of barrels. With careful aim, they should make their way to the other side of the abyss. From there, they will need to cross a gap and fight off several more Klobbers, with some even stealing lives. After getting over a few more gaps, the Kongs will have to travel up to another abyss and cross it by using barrels. The monkeys will have to shoot into a Diddy or Dixie Barrel (depending on which Kong is in the lead) and continue to blast over the spikes below. Soon, they will land on a small platform, and have to hop right back into another barrel. They must shoot through the many barrels and eventually get to the other end of a wide abyss. Here, they will find the Star Barrel.

Halfway through the level, the Kongs must jump over two small gaps and watch out for a few Klobbers and Kabooms. They will then have to hop into another barrel and begin to shoot into the following barrels after it. This time around, the abyss that must be crossed is much wider than the before ones, and Zingers can be found more often around each barrel. After shooting over some Zingers, the group will finally get to the other side and have to dodge a few Kabooms and Klobbers. After that, they will need to choose either a Diddy or Dixie Barrel to start shooting over another spike-filled abyss. Obstacles are placed more frequently over this pit. The heroes will make it to the other side after shooting over several Zingers. At this point, they will have to hop over some spikes to reach some ledges. As they watch out for gray Klobbers on the ledges, they must climb up and find the End of Level Target. When they hit it, they may exit the level. 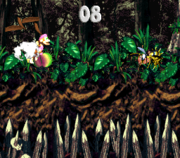 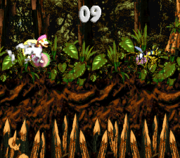