Black Ice Battle is the second level of the Lost World in Donkey Kong Country 2: Diddy's Kong Quest. It can be accessed via the Klubba's Kiosk of Krem Quay. In this level, Diddy Kong and Dixie Kong must descend down an icy cavern, and the ground slippery and made of ice. Due to the icy floor, the Kongs have limited traction, so the player must carefully move them around the area. In the level, the Kongs often have to jump between icy slopes or jump onto the next platform below them. There are many Zingers in the level, most of whom appear within the gaps or around them. Other enemies include Klampons, Klobbers, Krooks, Flitters, Neeks, and Spinies. In the Game Boy Advance version, the level has a light green background. 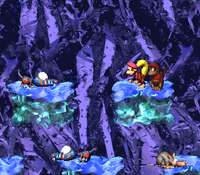 To begin the level, the Kongs must hop over a Zinger and slide down an icy slope. They will come up to a gap at the end, and they should drop down into it to reach the floor below. Here, there will be several Klampons charging at them, although the foes can be easily defeated with a simple jump. The heroes must make their way down to the next floor, where they will have to dodge a few Zingers, as well as a Spiny walking along the path. Soon, they will meet up with yet another abyss. Without touching the Zinger flying by, the monkeys must fall through it and jump over a pair of Zingers to reach the next gap. Once they make their way through here, they will have to travel up and down steep slopes. Klampons are also walking across the ice. Players should must make it to another gap and drop down to the next floor. At this point, the monkeys will need to slide down one long and steep slope, while hopping over dangerous Zingers in their path. If they are able to avoid the pests without sliding into them, the heroes must then jump between two Zingers into another gap. Once through the gap, they will be perched on the next floor, and they should walk to the left and fall through another small gap. It won't take them too far downwards, and a Krook will be throwing one of his hooks as they land. The Kongs must escape the foe, and walk right into another abyss. They will land on a slope and slide into another villainous Krook. It must be avoided at all costs. After getting away from the foe, the heroes can drop down into another gap and get to the next floor. Here, they will have to jump over a pair of Zingers and come up to another gap. Dropping down will make them end up in an area filled with several large platforms. They must fall through a crack between the platforms and dodge a few Zingers, until they find another gap. This one will take them directly to the Star Barrel when jumped through.

From this point, the pair will end up at a fork-in-the-road; they can take either way and fall through a gap. Soon, the monkeys will end up at the meeting point of the two directions and have to drop down through yet another abyss. This time, they will land in an area filled with dozens of small platforms. Each one has a foe on them, who must be avoided at all costs. The heroes should sneak between the cracks of the platforms and jump over a few Zingers to reveal another gap in their path. Dropping down into this will take them to the lower floor. Here, they must jump over a few small alcoves, all containing Zingers. If they can get through this area, they will have to drop down into another gap and land on a steep slope. Without hitting nearby Klampons, the monkeys must continue to descend through the cave and drop to an even lower floor. They will come up to a few short floors, and have to slide down some slopes while dodging some sharp Spinies. Soon, they will make it to a longer area. However, there are a few steep slopes that are shaped in a triangle-like form, with Zingers perched on top of them. This makes the foes much harder to jump over than usual. The Kongs must time their jumps well, and hope to reach another gap, which they should hop through. Once they drop down through here, they will have to jump over more Zinger-filled alcoves and fall down still another abyss. It will take them to the bottom floor, where the heroes must hop up a platforms to get over a mound of ice. They can find the End of Level Target, which has either a Banana Bunch, Banana Coin, or Extra Life Balloon. 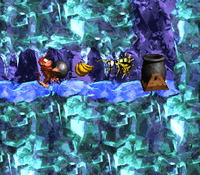 Diddy carrying a kannonball to the Kannon, which leads him to the Bonus Level