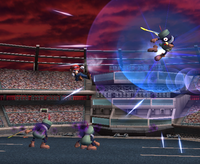 It consists of a platform similar to Final Destination. The background has an audience and clouds. During the Subspace Army's attack, it shares its background with the Halberd stage.

The stage begins with a battle between Mario and Kirby, watched by Peach and Zelda. After the brawl, the Subspace Army invades the stadium, and Mario and Kirby, along with the princesses, fight against the Primids, among other Subspace creatures. Eventually, the Ancient Minister appears, carrying a Subspace Bomb. Mario is knocked away (ending up in Skyworld) and Kirby battles fighting Petey Piranha, who holds the princesses captive. Kirby manages to rescue one of them, but Wario appears wielding a Dark Cannon. After failing to capture Kirby, Wario notices the other princess and fires his weapon at her instead, reducing her to a trophy. The stage ends with Kirby escaping with the princess he saved and the Subspace Bomb exploding, taking the stadium to Subspace. Midair Stadium cannot be played again until the game is cleared.

Background Music (in order of appearance)[edit]

The stage is modeled after the Pokémon Stadium in Super Smash Bros. Melee. It is also used as the How-To-Play tutorial's stage.