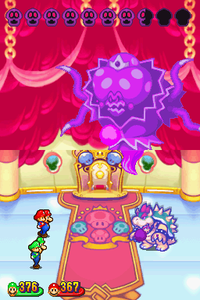 The Mario Bros. and their baby counterparts fighting Shrowser

“Mmm... I can feel a power burning in my belly! What in the world did you feed me?”
—Shrowser, Mario & Luigi: Partners in Time

Shrowser[1][2] is the final boss fought in Mario & Luigi: Partners in Time. Bowser takes this form after ingesting a purple mushroom that turned out to be the form of the dormant Elder Princess Shroob; she ends up possessing him, and Mario, Luigi, Baby Mario, and Baby Luigi fight them both in the present Peach's Castle.

While Bowser is possessed, he retains his normal appearance and personality, although with multiple signs of the Elder Princess Shroob's influence; he flashes purple, has purple eyes, and has an afterimage effect and purple clouds around him. The music during the Shrowser battle is the same one used during the earlier battle against Bowser and Baby Bowser.

Shrowser is the only boss in Mario & Luigi: Partners in Time that can only be defeated with counterattacks. He is also one of the few bosses in the Mario & Luigi series with this condition; the others include Ludwig von Koopa from Mario & Luigi: Superstar Saga + Bowser's Minions and Thunder Sass from Mario & Luigi: Dream Team. Because the brothers are unable to attack during the fight, Shrowser cannot be targeted, and the name normally never appears in-game; however, it does appear as a string in the ROM that is translated in some releases of the game.[2][3]

As the battle starts, a purple aura emits from Shrowser and takes the form of the Elder Princess Shroob on the top screen. Shrowser then states that the Mario Bros. and their baby selves cannot perform any actions, such as attacking or using items. In order to defeat Shrowser, the quartet must jump over or hammer back several of the fiery projectiles that he continually spews at them; Bowser himself deflects any and all counterattacks away, causing them to hit the Elder Princess Shroob's spectral form instead. While Shrowser has a regular set of stats and targets like most other enemies and bosses, much of it is unused due to the battle's programming and the win condition established at the beginning;[3] instead, the Mario Bros. and their baby counterparts must deplete the Elder Princess Shroob's health meter, which is represented by Shroob-like mushrooms on the top screen.

Shrowser's attacks can be countered by looking at the Elder Princess Shroob and her movement patterns. If she points with her right arm, Shrowser attacks Mario and Baby Mario; if she points with the left arm, Shrowser attacks Luigi and Baby Luigi. Depleting the Elder Princess Shroob's health meter requires jumping over the equivalent of 20 fireballs or more, hammering back the equivalent of 10 fire orbs or more, or some combination of the two. The Bros. and Baby Bros. must survive the entire round of counterattacks as well; even if the health meter is depleted, if they are all KOed before that turn of attacks ends, it still counts as a Game Over. Once successfully defeated, the Elder Princess Shroob finally disappears, causing Bowser to faint.