Sunnycide is an egg-like Shroob monster that appears as the seventh boss in Mario & Luigi: Partners in Time. Sunnycide's name is a pun on the term 'sunny-side up/down', ways to fry eggs, and the suffix -cide, meaning "to kill." It is found in Yoob's belly, where it served as the guardian of the Shroob-created eggs holding the captured Yoshis.

Sunnycide resembles a large pink egg with green spots (similar to Yoob's egg). The shell is cracked through the middle horizontally, creating a mouth and separating Sunnycide's body into two halves. Two eye-stalks sprout from the top of the egg, while two tentacle-like arms and two round feet emerge from the bottom half. Inside the mouth is Sunnycide's weak spot, a large bump resembling an egg yolk partially covered with a bandage. During its first encounter with the Mario Bros., it immediately attacks them, though Luigi keeps trying to run away but is repeatedly blocked.

Sunnycide's primary attack is picking up the eggs containing Yoshis resting in his lair and flinging them at a Mario brother, using a targeting reticule similar to Yoshi's when he throws a Yoshi egg. The Mario brothers can jump over the eggs to dodge the attack or jump on them (jumping on the eggs does not break them or deal any damage, even if the eggs are cracked). When it runs out of eggs, Sunnycide may slam the ground, making five more eggs fall from the ceiling. Sunnycide also attempts to inhale a Mario Bro. and eat him. The corresponding Baby Bro. can counter the attack by using his Hammer to strike Sunnycide's weak point inside its mouth. If the brother is eaten, Sunnycide recovers 20 HP and spits out the Bro. that was eaten, damaging him in the process (20 HP). 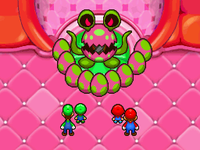 Since Sunnycide is encased in a hard, outer shell, most attacks do very small damage to it, although it is weak against fire. To defeat Sunnycide, the Mario Bros. must break open the Shroob eggs used by Sunnycide as weapons and free the Yoshis trapped inside. After a Yoshi is freed, it runs up to a ledge overlooking the battlefield and attempts to aid the Mario brothers by pushing a large Chomp Rock on top of Sunnycide. Five Yoshis are needed to push the Chomp Rock onto Sunnycide. Incidentally, every set of five Yoshis has one green Yoshi, one black Yoshi in the American English version (or one yellow Yoshi in all other versions), one blue Yoshi, one light blue Yoshi, and one pink Yoshi.

After the five Yoshis push the Chomp Rock off the ledge, the Chomp Rock knocks Sunnycide on its back, exposing its weak point, as the Yoshis run off. While on its back, Sunnycide can perform two moves. First, Sunnycide can pull a chain with its right or left arm, creating a hole in the floor. To dodge this attack, Mario or Luigi has to jump right before the hole appears. The hole quickly disappears, allowing the Mario brother to fall on solid ground. If the Bro. falls through the hole, he falls from the ceiling and hit the floor, getting damaged in the process. Additionally, Sunnycide can pull a rope that turns out the lights in Yoob's stomach. This technique also summons a Boo to attack either Mario or Luigi. The Boo can be countered by a Baby Bro's Hammer. The side of the chain or rope corresponds to which Bro will be attacked. The player can tell which Bro he is going to attack by looking at which arm he used to pull it. His right arm means Mario will be attacked and his left means Luigi will be attacked.

Eventually, Sunnycide gets back up up and continue throwing eggs at the Mario brothers, so they must free more Yoshis to knock Sunnycide back down. Once Sunnycide is defeated, any eggs remaining in the battle break open, releasing the Yoshis trapped inside.