List of beanholes in Mario & Luigi: Partners in Time 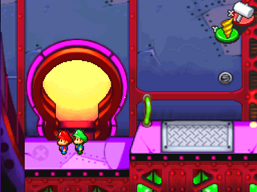 Baby Mario and Baby Luigi near the bean in Vim Factory.

In Mario & Luigi: Partners in Time, Baby Mario and Baby Luigi can collect Beans by coming across beanholes -- X-shaped bean symbols/spots/marks on the ground -- all throughout the Mushroom Kingdom, both present and past times. To retrieve these beans, the babies must use the Baby Drill to drill themselves into the beanhole, then by popping out of the ground at the spot. The Baby Drill is learned after the babies defeat the Hammer Bros. at the Vim Factory.

There are 167 Beans to collect from beanholes. Hollijolli Village, Koopa Cruiser and Peach's Castle Dungeon (in the present) do not have any beanholes.

Note: These beans can be obtained only before being ejected from it.