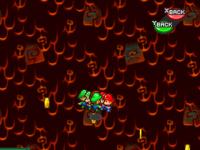 The Baby Spin in action 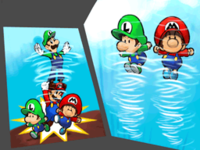 The Baby Spin is a height-gaining move used by the Mario Bros. and their younger selves during the events of Mario & Luigi: Partners in Time. To execute the move, the adult Mario Bros. run into their baby selves during a Spin Jump. The move forces the babies into the air, spinning as they descend. This move can be used to hit blocks and switches on ledges that even the Baby Toss move cannot reach.

The move is taught by the Toadsworths along with the Baby Cakes move after Mario, Luigi and the babies clear the Gritzy Caves and before they head for Thwomp Volcano. After the move is taught, the player has to rescue Baby Peach using the two moves.

A similar move is used by Mario Bros. on Big Massif and Lil' Massif in Mario & Luigi: Dream Team.