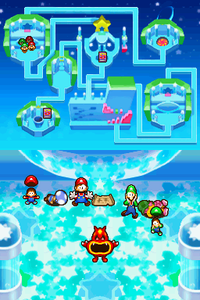 The Elder Shrooboid is a boss that appears in Mario & Luigi: Partners in Time. It is found in the Star Shrine and must be fought to obtain one of the Cobalt Star shards. The Elder Shrooboid has a similar appearance to the Junior Shrooboid, but is red with yellow spots and spikes on top of its head, and is the strongest of all the Shrooboids. Its name and color are a reference to it being the Junior Shrooboid's tougher, "older" lookalike, similar to how Mario is Luigi's older brother. 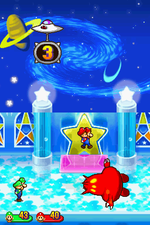 The Elder Shrooboid's spikes normally make it immune to any jump-based attacks and Bros. Items, and it takes critical damage from the Ice Flower. Its first attack involves trapping Mario and Luigi in crystals, similar to Shroids, and then grabbing a ball and chain. The Bros. must jump to break their crystal prisons and dodge the ball and chain as it spins towards them; the spinning eventually causes the Shrooboid to become dizzy, making it drop the ball and fall over. It then gets up again, screams in a rage, and angrily knocks the ball at either of the Mario Bros., while lunging head first into the other brother; the metallic ball will have either an "M" (for Mario) or an "L" (for Luigi) to represent its target. Both Bros. must jump to dodge the attacks. 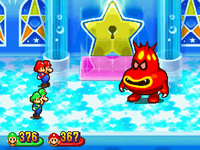 The brothers battling the Elder Shrooboid in its second form.

If attacked, the Elder Shrooboid will create a spiked ball to throw towards the Mario Bros.; the ball circles around them, moving faster with each orbit, until it closes in on one of the Bros. to strike. The ball can be deflected with the hammer, and may poison the target in addition to damaging them if it hits. Successfully countering sends the spiked ball flying into the air, causing the Elder Shrooboid to gasp and fall over from shock; in this state, it is vulnerable to jump attacks, and its defense is lowered.

After seemingly defeating the Elder Shrooboid, it starts to shrink into nothingness, but then instantly grows to about twice its size and resumes the fight. In this state, its attacks are faster and more powerful, and the objects it uses are much bigger as well. Additionally, after becoming gigantic, the Elder Shrooboid pulls a Shroob saucer from its mouth; the saucer counts down from four turns before unleashing a massive energy blast, similar to the one encountered in the scripted battle against the Shroobs near the beginning of the game. Similar to that instance, the Mario Bros. automatically lose if the countdown reaches zero.[1] Unlike that instance, the Mario Bros. can deflect the Elder Shrooboid's spiked balls at the Shroob saucer to reset the counter and avoid an instant Game Over.

In the North American version of the game, the Shroob saucer changes position in the air during the battle, flying above either the Shrooboid or the Mario Bros.; if Baby Mario deflects a spiked ball, it flies over the Elder Shrooboid, and when Baby Luigi deflects the ball, the spiked weapon flies over the Bros., and the saucer thus changes the character required to reset its counter each time it moves. In all other versions, the spiked ball always goes up, even if Baby Mario deflects the attack—the Shroob saucer always stays above the Mario Bros. and is much easier to hit.