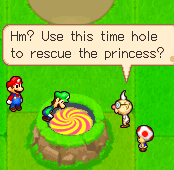 Mario and Luigi look into the first Time hole.

Time holes are special holes found in the game Mario & Luigi: Partners in Time, having the appearance of circular swirls of a pink and yellow color. They are essentially tears in the space-time continuum that can be used to travel from the past to the present and vice versa. Time holes can open for several reasons. The first known time hole is opened when the damaged time machine returns from the past (which is closed after the Mario Bros. and Stuffwell use it), and the time holes that follow are caused by reactions from the Cobalt Star shards. The Elder Princess Shroob also has the ability to open time holes in battle, which she promptly uses to attack Mario and Luigi.

E. Gadd later used the energy radiating from the time holes to power his time machine after the Cobalt Star was destroyed. He used this to swiftly bring the Mario brothers and Princess Peach back to the present.

If one pair of the Mario Bros. jumps through a time hole alone, the other pair follows soon after, regardless of the terrain outside the time hole they went through.