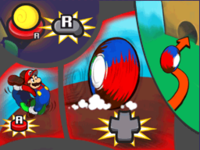 Instructions for the Bros. Ball in Mario & Luigi: Partners in Time.

The Bros. Ball[1] is a move usable by Mario and Luigi that only appears in Mario & Luigi: Partners in Time. 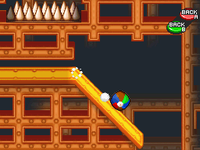 Bros. Ball being used in the Koopaseum.

In Mario & Luigi: Partners in Time, the move is taught to Mario and Luigi by Toadsworth and Toadsworth the Younger after Yoshi's Island is cleared and before the player heads for Gritzy Desert, in which the move is required to clear a minigame in Peach's Castle to even gain access to the time hole leading to the area. When using this move, the bros both form themselves into a wheel and start rolling along the ground like a ball, allowing them to traverse through areas faster. Additionally, the Bros. Ball lets Mario and Luigi go under walls and small spaces in the game.

Later on in the game, Mario and Luigi learn the ability to temporarily flatten Baby Mario and Baby Luigi so they can move under even smaller spaces. This move is called Baby Cakes, and it is learned, along with the Baby Spin, by the two Toadsworths after clearing Gritzy Caves and before the quartet head out to Thwomp Volcano.

Mario, Luigi, Baby Mario, and Baby Luigi rolled up in the four brother version of the ball in the Super Mario-Kun, volume 37.

In the Super Mario-Kun volumes adapted from Mario & Luigi: Partners in Time, Mario and Luigi use it as an attack rather than a utility move, where they smash into the Snoozorb in volume 35. Later, in volume 37, a four brother variation of the Bros. Ball is used against the Elder Princess Shroob.