This article is about Bowser powered with the Dream Stone. Not to be confused with Bowser in the Dream World, also known as Dreamy Bowser.
“Check out my flame! Yeah! I am ROCKING this new look! Oh man, I have so much power... I can do whatever I want! Peach... This island... This world... All of it... MINE! And you guys are... COOKED!”
—Dreamy Bowser, Mario & Luigi: Dream Team

Dreamy Bowser is an enhanced form of Bowser and the final boss in Mario & Luigi: Dream Team. He is created when Bowser inhales the shattered remains of the Dream Stone. While in this form, Bowser is much larger, glows with bright colors reminiscent of those of the Dream Stone, and has purple, pupilless eyes and objects resembling the Dream Stone on his head and stomach. "Dreamy Bowser" is also the name for Bowser in the dream world, like Dreamy Mario, who Dreamy Luigi and Mario fought previously. Like all the other final bosses in the Mario & Luigi series, he is an enhanced or possessed version of Bowser (with the exception of Dark Bowser, who is actually the Dark Star taking the form of Bowser).

Dreamy Bowser about to fight Mario and Luigi.

On the balcony of Neo Bowser Castle, Bowser appears in front of a caged Peach and reveals to the Mario Bros., Starlow and Dreambert his intentions with the Dream Stone. He begins to use it to erase the Mario Bros. from existence, however, before he can do a single thing, Starlow and Peach use "the power of good thoughts" to interrupt his attack and destroy the Dream Stone upon Dreambert's insistence. However, Bowser, however, knowing that he can still destroy the brothers, inhales the Dream Stone shards. Although regretting inhaling it (mentioning that the taste of the Dream Stone is "gross") and starting to cough and splutter, the Dream Stone's remains possess Bowser, turning him into Dreamy Bowser. With his new unlimited power and extra strength from the Dream Stone, Dreamy Bowser reveals his true intentions to kidnap Peach for himself, take over Pi'illo Island and eventually the entire world. The empowered Koopa King engages Mario and Luigi in combat.

Upon defeat, Dreamy Bowser explosively expels the remains of the Dream Stone from his body and reverts to his normal form, abit dazed from his power and weakened. The Mario Bros. then immediately take him out with their hammers, sending him flying and freeing Peach from her prison. 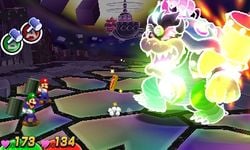 One of Dreamy Bowser's more common attacks involves shooting giant, rainbow-colored fireballs, which the Bros. need to jump at the same time to avoid. He clones himself part-way during this attack to shoot double the fireballs, where the fireballs shot alternate between each bro.

Dreamy Bowser can also create multi-colored minions from portals to charge at the Bros, which include Dreamy Goombas that can jumped over or on, Dreamy Paratroopas that can be sent back at minions behind them, Dreamy Shy Guys that will jump over the Bros, and Dreamy Bob-ombs that will explode on contact. After summoning these enemies, Dreamy Bowser will retreat to the background, where he will heal his arms 200 HP and his body 150 HP every turn by eating endless piles of meat until the minions are destroyed. If the Bros. manage to avoid a sufficient number of his minions during an attack, Dreamy Bowser will also slam his fists into the ground to create a shockwave that must be jumped over, and eliminates any of the minions it hits.

Dreamy Bowser about to heal himself with meat after just having summoned Dreamy Goombas, Dreamy Shy Guys, Dreamy Bob-ombs, and Dreamy Paratroopas.

Dreamy Bowser can also create an Airship with Dreamy Shy Guys (called the Shy Guy Airtub DX) that will chase Luigi as the Bowser head of the ship fires flames at Luigi. While on said airship, Mario must repeatedly attack the Dreamy Shy Guys with his hammer to reach the bow where he can damage the Bowser head, while Luigi jumps over the fireballs it generates. The Shy Guy Airtub DX will go into the background if it either hits Luigi or survives this attack, and will shoot cannonballs every turn; the left cannon on the ship will shoot cannonballs at Mario, the right one fires at Luigi, and the middle one will simply not hit anyone. These cannonballs will damage the Shy Guy Airtub DX if successfully deflected with a hammer. It can be hit with a Taunt Ball to initiate the chasing attack against Luigi, allowing the player another chance to destroy it.

Dreamy Bowser's arms are very important in this battle, as he can only perform certain attacks and actions with his arms present. His left arm will periodically be used to grab a brother; the remaining brother cannot use Bros. Attacks as long as a brother is being held, and Dreamy Bowser will throw the brother either that turn or within a few turns if the left arm is still intact, forcing the remaining brother to catch the thrown brother by rapidly pressing their jump button to dash: the thrown brother will take damage every time he bounces off the ground. Dreamy Bowser will simply drop the bro if one bro is KO'd, his arm is disabled, he decides to turn giant, or he uses an attack that requires both hands (i.e. summoning minions).

His right arm is even more important, as it will prevent Dreamy Bowser's body from taking any damage from aerial attacks while it is still active. Disabling the arm allows the Bros. to land aerial attacks, which will deal critical damage to his head.

Most attempts to attack Dreamy Bowser while he is in the background will result in the brother that initiated the attack being struck with lightning, unless the 'attack' was a Taunt Ball. Unusually for background enemies, using Taunt Balls on Dreamy Bowser or his Shy Guy Airtub DX causes them to perform a specific action, rather than just bringing them into the foreground.

Throwing a Taunt Ball at the Shy Guy Airtub DX will cause it to repeat its opening attack at Dreamy Bowser's orders and then return to the background, defeating the normal purpose of using a Taunt Ball: however, Mario can potentially destroy the Airship during its attack if he's fast enough. Throwing a Taunt Ball at Dreamy Bowser will cause him to jump into the foreground and chase the brothers through the minion crowd if enough of them are left. The Bros. must jump over or on the minions to avoid getting stepped on by Dreamy Bowser, who will also instantly KO minions upon contact. Much like the Shy Guy Airtub DX, Dreamy Bowser will return to the background after he either stomps on a brother or tramples most of his minions.

Dreamy Bowser has the second highest stats of any mandatory boss in the Mario & Luigi games. 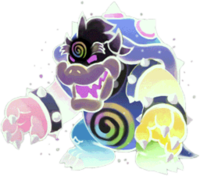