Donkey Kong in When the Banana Splits 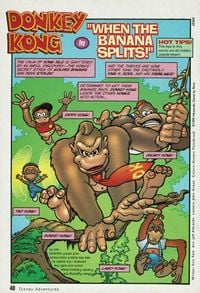 The first page of When the Banana Splits

Donkey Kong in When the Banana Splits was a four-page Donkey Kong franchise comic published in the Winter 2000 issue of the magazine Disney Adventures. Though the comic was advertised as being based off the game Donkey Kong 64, it was actually a simple version of the game's story. Throughout the comic, various hints and cheats for Donkey Kong 64 appear, written upside down.

As stated above, the story of When the Banana Splits is simple: it starts off with King K. Rool and several Kritters storming through the jungle, having stolen all of Donkey Kong's Golden Bananas. Unfortunately for K. Rool, the Kremlings had decided to steal the bananas while Donkey Kong, Tiny Kong, Chunky Kong, Diddy Kong and Lanky Kong were home, so the Kongs easily follow the Kremling Krew through the jungle when they realized the bananas were stolen.

Eventually the Kongs catch up with K. Rool and his minions and ambush them. Easily dispatching K. Rool's Kritter minions, the Kongs go after the fleeing Kremling king himself. Catching K. Rool, Donkey Kong manages to defeat him using his Super Duper Simian Slam. After K. Rool's defeat, the Kongs take their Golden Bananas back.