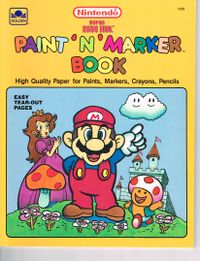 Two separate coloring books both titled the Super Mario Bros. Paint 'n' Marker Books were released by Little Golden Books in 1989 and the second presumably in 1993. The first release was based on the original Super Mario Bros., with the second title being based off the live-action film. The 1989 release features various pages to color featuring Mario, Toads, Princess Toadstool and the Mushroom King, and various enemies. The coloring book based on the film features various scenes from the movie recreated in drawing.

A different line of coloring and activity books simply titled Super Mario Bros. were released by Little Golden Books between 1989 and 1993.

A book released in the Spanish language exists, bearing a larger version of the cover of the 1989 Super Mario Bros. Paint 'n' Marker Book coloring book.