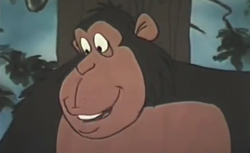 Uncle Julius is a character from the Saturday Supercade episode Gorilla Ghost. He is Donkey Kong Jr.'s uncle who lives in a city zoo.

Uncle Julius thanked Donkey Kong Jr. and Bones for liberating the zoo, and waved goodbye to the two as they continued their search for Donkey Kong.