There are four different types of Ninjapes, in the colors black, green, blue and red. Each variant has its own attacks and traits. 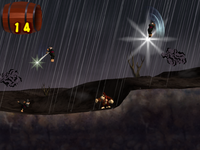 Green Ninjapes attempt to keep a distance from Donkey Kong and attack by throwing shuriken horizontally, though they can follow the contour of the ground. If Donkey Kong gets too close to one, they back away from him, though they can easily be caught up with and defeated with a Sound Wave Attack.

Blue Ninjapes are most common in levels involving Donkey Kong having to use a Helibird to float to higher parts of the stage. They throw shuriken in straight lines of any direction at Donkey Kong to damage him and hide when he gets too close. A blue Ninjape sometimes assists a Tusk boss during battle. They are able to stand on ceilings.

Red Ninjapes are the least common or involved of the Ninjapes and can be seen sitting atop Kiba Pig Poppos, Mini Elephant Cannons, and Fire Pig Poppos. They cannot hurt Donkey Kong, and when he gets too close to them, they disappear. Likewise, if Donkey Kong attacks an enemy with a red Ninjape on top of it, the red Ninjape simply disappears.