The Double Tusks are the fourth and fifth Tusks in Donkey Kong Jungle Beat. They are the co-rulers of the Chili Pepper Kingdom in the original version, and the Lychee Kingdom in the New Play Control! version. One appears very similar to Grave Tusk and Torch Tusk, and the other has a new appearance, being a pink camouflage in color. These Tusks attack very similarly to the past Tusks, but split their HP between themselves, each having 250 HP rather than the usual 500 HP per boss.

Unlike most bosses, Double Tusks do not become angrier when their HP is low but rather when its partner is defeated. When this occurs, the other Double Tusk gains the laser attack and fiery cannonballs used by Torch Tusk. The attacks differ between the last Tusk remaining; while the brown one only attacks with the flaming cannonballs, the pink camouflage one attacks with both flaming and normal cannonballs. Additionally, the brown Tusk also attacks with the laser twice, once normally and then in reverse. 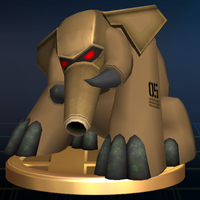