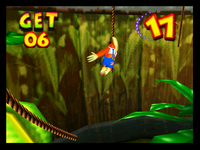 Speedy Swing Sortie is a Bonus Stage found in the game Donkey Kong 64.

After the player jumps in the Bonus Barrel, they can play this game to try and win a Golden Banana. In this minigame, the player will need to collect all the coins in the time-limit by jumping up the trees and swinging from a vine to another. Lanky's version of the stage has many vines, so he only has to climb up a tree and then just swing from a vine to a vine. Tiny's version on the other hand has less vines, requiring her to use Ponytail Twirl to guide herself across trees. In both versions, there is a mushroom, that the player can bounce on to reach the tree top instead of climbing it.

The unused variant also makes heavy use of Zingers.

Bounce up into the trees and collect all the coins!