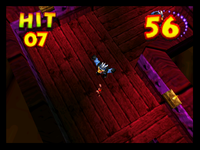 Mad Maze Maul is a Bonus Stage found in the game Donkey Kong 64.

After the player jumps in the Bonus Barrel, they can play this game to try and win a Golden Banana. In this minigame, the player needs to navigate through a maze and defeat the required number of Kremlings in 60 seconds. The maze only contains Kritters and white-haired Kasplats (who do not have Blueprints). After the player defeats all the baddies in the maze, they can make their way to the checkered flag to clear the stage.

Destroy all the baddies, then head for the checkered flag!