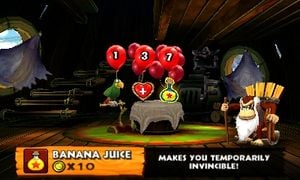 “Donkey Kong's white bearded, grouchy grandfather Cranky Kong has set up shop in each world to help Donkey Kong in his quest. Cranky Kong can ramble on about anything, but don't ignore anything he has to say, as his ramblings provide useful information to those who pay careful attention.”
—Donkey Kong Country Returns instruction manual

There is a shop in each of the eight worlds, although they all carry the same selection of goods at the same prices. Many useful items can be purchased at these shops in exchange for Banana Coins. Although most of what Cranky sells is not mandatory, he does sell a key in each world, which will open up an alternate path on the map, allowing the player(s) to access additional levels. This is required for completing the game by 100 percent.

As with previous games, Cranky will sometimes complain about his situation such as needing Banana Coins, being stuck in a shack, or how the game is "too hard" for Donkey Kong and Diddy Kong. He often makes snide remarks about the items purchased by the player(s), and frequently alludes to the Golden Temple. If the player(s) currently have a maximum number of 99 lives, Cranky refuses to sell an Extra Life Balloon to them. Likewise, if the player(s) buy a key, they cannot purchase it again.

The shop was replaced by Funky's Fly 'n' Buy in Donkey Kong Country: Tropical Freeze, due to Cranky Kong becoming a playable character.