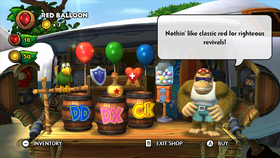 Funky's Fly 'n' Buy is Funky Kong's business in Donkey Kong Country: Tropical Freeze and its Nintendo Switch port. It acts as the successor to Cranky Kong's Shop from Donkey Kong Country Returns, owing to Cranky Kong being one of the playable characters. Funky's Fly 'n' Buy is set from the side of a white, orange-striped airplane, which slightly resembles the Jumbo Barrel from the original trilogy. Like Cranky's Kong Shop, the Kongs can purchase items by using Banana Coins.

Funky has a shop in each of the game's worlds (except for the unlockable Secret Seclusion), although each of them carry the same selection of items at the same prices. Many useful goodies and toys can be purchased at these shops in exchange for Banana Coins, although none of the items are mandatory to complete the game, unlike in Returns.

In the game's Nintendo Switch port, Funky Kong is one of the playable characters. In response to this, while the player plays as Funky, Funky's Fly 'n' Buy is run by a parrot named Tawks, who copies his dialogue word-for-word, and also gives him an employee discount.

Along with these items, Funky Kong also sells toy figurines. These can be bought with five Banana Coins each by selecting the Capsule Toy Machine. Many of these items first appeared in Donkey Kong Country Returns.

The following gallery shows instances of Funky's Fly 'n' Buy throughout all of the game's worlds, except for Secret Seclusion where the shop is unavailable. The name of the world is noted underneath each image, followed in parentheses by the shop's numbering code (where "S" stands for "shop"). The numbering code is only displayed on the save file when the player quits the game immediately after visiting the shop in a world. Also presented among these images is the concept artwork of Funky's Fly 'n' Buy, which can be unlocked and seen in the Extras gallery after the player beats the game on Hard Mode. This artwork shows that the shop was originally going to be called Funky's Flights like Funky Kong's business in the original Donkey Kong Country.