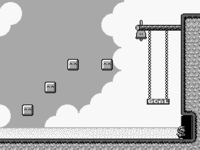 The Goal at the end of Mushroom Zone in Super Mario Land 2: 6 Golden Coins

The Goal[1] in Super Mario Land 2: 6 Golden Coins is a door found at the end of most levels in the game. The Goal has a bell above it, which will allow the player to play a bonus game[2] (or Bonus Round[3]) when hit. Usually to get to the bell, the player has to jump on platforms or other obstacles to reach it. Some levels also contain a star-marked door that takes the player to a secret exit.

If the player hits the bell, a bonus game begins.

In 「マリオキャッチャー[4]」 (Mario Kyacchā, Mario Catcher), the player has to press the

to make the moving crane drop and collect one of the rewards, which are moving on a conveyor belt. The rewards vary between levels, but usually contain power-ups and 1-ups. Collecting the reward will have it take an immediate effect on Mario. It is possible for the crane to grab nothing at all.

In 「アミダゲームⅡ[4]」 (Amida Gēmu II, Amida Game II), players can move Mario to one of four slots where players then press the

button to hit a block. Two rats jump around very rapidly on wires, which lead to a Mushroom, a Fire Flower, a Carrot, or a 1-Up Heart. When a block is hit, the rats eat two of the wires, and an electric shock travels to the item, which floats down to Mario and grants him the power-up. If the shock leads to a power-up that the player does not want, then the player can simply press left on the D-Pad to exit the game without obtaining it.

This game is a reference to Amidakuji, as well as the bonus game from Super Mario Land.