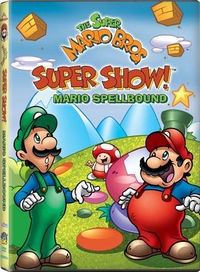 Mario Spellbound is the fifth thematic DVD of The Super Mario Bros. Super Show!, whose theme is episodes based on stories about magic. The DVD was released by nCircle Entertainment, on September 16, 2008, the same day as Air Koopa.

The DVD contains the following episodes:

The episodes were taken from the same database of the full boxset of The Super Mario Bros. Super Show!, with the episode King Mario of Cramalot playing slower than usual.