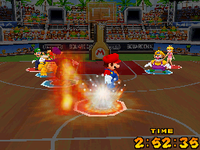 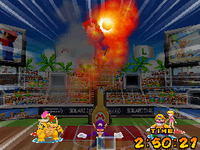 The Fire Shot is Mario's Special Shot in Mario Hoops 3-on-3. To perform it, the player must tap out the letter M twice.

Mario initiates the move by lighting the ball on fire and dribbling it in a vertical M shape. Once initiated, Mario throws the ball with one hand towards the hoop with red flames trailing behind it. If shot from inside the 3-point line, the ball lands in the hoop with a fiery explosion.

If shot from outside the 3-point line, the visuals do not change, but a teammate needs to grab the ball and dunk it in.