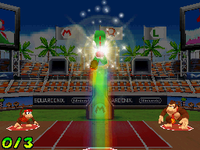 The Flutter Dunk is Yoshi's Special Shot in Mario Hoops 3-on-3. To perform it, the player must tap out the letter M twice.

Yoshi initiates the shot by dribbling in an M-shape, which coats the ball with water. If the shot was executed from inside the 3-point line, Yoshi will Flutter Jump into the air, with a rainbow trailing behind him. He will then forcefully dunk the ball in the hoop and a rainbow-colored ring will appear.

If executed from outside the 3-point line, Yoshi shoots the ball, with the rainbow trail behind it, towards the hoop. When a teammate dunks it in the hoop, the rainbow ring appears.

The sound it makes is from Yoshi's flying sound in Super Mario World.