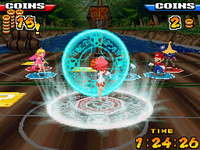 The Holy Shot is White Mage's Special Shot in the Mario Hoops 3-on-3. To perform it, the player must tap out a star shape twice. The star likely represents the ultimate white magic.

White Mage begins the shot by levitating the ball in a circle around her, as four blue symbols magically appear on the ground around her. The symbols start emitting white columns of light and eventually become a bluish-white disk. White Mage touches the ball and casts it high into the air. The entire screen turns white, and the ball comes back down, creating a brilliant blueish-white light show when it enters the basket.

If shot from outside the 3-point line, the ball doesn't leave the screen. Instead, the ball is cast toward the basket with a gleaming white and blue trail. As usual, a teammate needs to dunk the ball in to complete the shot and make the light show appear.