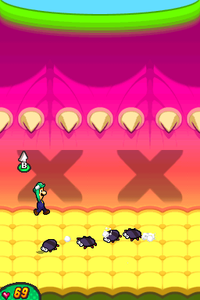 Luigi fighting inside of the giant Sockop

Sockops are sock-like pitcher plant enemies encountered in Dimble Wood during Mario & Luigi: Bowser's Inside Story. The name is a pun of the dance "sockhop" and could also refer to its sock shape. They presumably enjoy consuming anything they can digest.

If Mario or Luigi try to jump on them, he is sucked into the hole on the top of the Sockop's head. The player then has to mash

for Luigi repeatedly in order to escape; otherwise, the brother may be poisoned, or the Sockop will drain their HP. However, if the brothers do a First Strike jump or use the Bros. Attacks Jump Helmet, Spin Pipe, or Magic Window, Sockops will take damage instead of draining their HP. They attack by tackling the brothers, normally running at one brother, then turning around and running at them again. However, if some sap-like saliva comes out from the hole at the top, they charge at the first brother and go offscreen, coming back to hit the other brother from behind.

Later in the game, Mario is captured by the Sockops and Luigi has to rescue him, getting stuck inside a Sockop in the process. While he is stuck inside the Sockop, Luigi can communicate with them, and doesn't have to fight them, as they will all think Luigi is being swallowed. He can also traverse the bramble patches spread throughout the wood. They have a boss, the giant Sockop; it is shrunk down to normal size during the events in the game, and is the Sockop that Luigi ends up using as a "puppet".

Sockops reappear in Mario & Luigi: Bowser's Inside Story + Bowser Jr.'s Journey, also appearing as enemies in the Bowser Jr.'s Journey mode, only during levels taking place in Dimble Wood. Sockops are melee troopers, and are weak against fire attacks from minions such as Fire Bros. and Fire Stalking Piranha Plants. 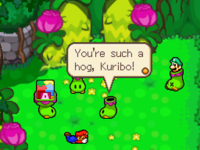