This article is about the gardens of Peach's Castle in Mario & Luigi: Bowser's Inside Story. For the site of the Star Festival in Super Mario Galaxy, see Castle Gardens. 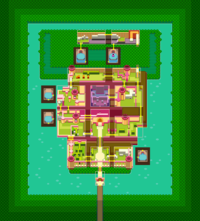 The in-game map of the garden

Mario and Luigi first enter into the gardens after destroying the Dark Star's barrier with the Miracle Cure, which was formed by Dr. Toadley using the three Star Cures. Unfortunately, the main doors have been sealed shut, so the bros. need to find another way in. The Koopa Paratroopa Trio flying overhead leads the brothers to find a massive Attack Piece Block in the bottom right corner of the garden. Hitting it as Shell Mario will allow the bros. to gain seven Attack Pieces. This will infuriate the Koopa Paratroopa Trio, demanding them to be paid for hitting the block. They first demand that they give him thirty coins, but later three hundred coins for them being so quick to answer "yes". As a result of the massive loot, the leader will show Mario and Luigi the last three blocks for the remaining pieces are. They are invisible, so the bros. have to jump randomly in order to find it. The end result will allow the bros. to perform the Special Attack, Falling Star.

Once the bros. have navigated through the garden - over hedges and through tight spots - they reach a massive trash dump with a fire and a pipe leaking water in the same area. This is the first use of Mario being able to drink tons of water and have Luigi hammer him to eject the water. Doing so puts out the flames, creating a whirlwind for the bros. to Spin Jump their way across. However, even with the small leap ahead, they end up at another pile of junk, where Midbus comes in with a flying platform, meeting the bros. for the very first time. Midbus takes out a controller, and activates a trash can-like robot, Junker (or the "Super Ultra Great Mega Trashy Monster Junker Bot" as he calls it), whom he uses it to take care of the brothers. Junker unexpectedly shuts down at first, though Midbus promptly reactivates it. Junker then starts dancing in place. Furious, Midbus breaks the controller, causing Junker to go out of control and start attacking Mario and Luigi.

Once the battle between Junker and the brothers is finished, Junker will malfunction again and rampage through some of the trash, as well as tossing the safe that Bowser is in onto a platform that is within the sharp piles of rubble. It will continue rampaging into the next room, and finally fall apart. Mario and Luigi can head into the other room now to find a pink pipe that leads into Bowser's body and continue the adventure even further. Of course, they need to go to the Lumbar Nook to fix Bowser's back before they continue on. Once Bowser is up and moving again, as well as knowing how to use the spike ball move, he can check the last part of the gardens. Through there, on the other side of Peach statues retouched with Fawful features, is a little tower that Bowser can enter into. All Bowser has to do is crumble the statues into bits with his newly learned move and crawl up the soft portion of the tower's wall to enter the castle.

Here is a list of overworld items found in Peach's Castle Garden during the events of Mario & Luigi: Bowser's Inside Story.[1]