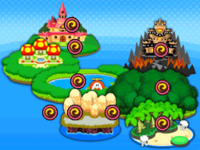 The complete map of Chakroads

The Chakroads are special portals located across the Mushroom Kingdom in Mario & Luigi: Bowser's Inside Story and its remake. They are described by Chakron as "a conduit for energy waves that bond earth to space", and their name is a portmanteau of chakra and "road". In Hinduism and Buddhism, the chakras, or energy centers, are special focal points located on the body, described as whorls of received and transmitted energies. Similarly, Chakroads are depicted as whorls of energy that form special "focal points" for Bowser to warp between different locations in the Mushroom Kingdom. 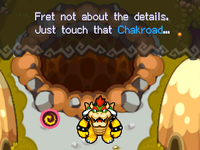 Screenshot of Bowser encountering a Chakroad

Bowser first encounters a Chakroad in the Cavi Cape after being prompted to smash a rock by a mysterious voice telepathically connected to Bowser's mind. After uncovering the first Chakroad, the voice explains that these portals can be used by Bowser to travel to places he has already visited (and discovered the respective Chakroad for), doing so through the power of his mind and memory. Chakroads can be found under objects such as rocks, which can be destroyed with a punch, or trees, which can be burned away by fire. Mario and Luigi cannot uncover Chakroads, and if they pass by one that Bowser had already discovered, they cannot see or interact with it.

It is later revealed the Chakroads are connected to the sage known as Chakron (who is also the one who speaks to Bowser), likely given his own connection to outer space after meditating on the stars for a thousand years. Chakron manually warps Mario, Luigi and Starlow to Toad Town late in their adventure, presumably using a Chakroad or similar ability, however it happened offscreen, so this cannot be confirmed.