Kretin (known as Keratin in the British English version) is a molecule with two forms called Alpha Kretin and Beta Kretin (called Alpha Keratin and Beta Keratin in the British English version), a form that connects itself to other Kretin units that change color, and a singular entity that is capable of cloning itself, respectively. It appears as a boss in Mario & Luigi: Bowser's Inside Story and its 3DS remake, Mario & Luigi: Bowser's Inside Story + Bowser Jr.'s Journey. Its North American name is a pun on "keratin", a body protein (from which the British English name is derived), and "cretin", a derogatory term for a stupid person.

When Mario and Luigi find Princess Peach in the Flab Zone inside Bowser's body, a cluster of Beta Kretins appear and kidnap her. After a long chase, Mario and Luigi finally reach Kretin in a room. Using the Spin Jump, Mario and Luigi free Peach from the grips of it, but it transforms into Alpha Kretin and attacks the brothers. While Mario gets ready to fight it, Luigi asks Starlow to fight Kretin instead of him. Starlow does not like his idea and smacks Luigi into Kretin, starting the battle, with the brothers defeating it afterwards. 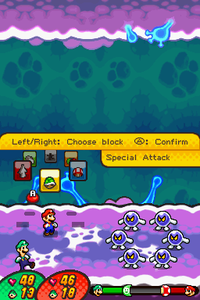 The Alpha Kretin's only attack is creating a ball of blue electric energy that will move through its body. It will then start to glow, turning its arm into a cannon shape. The Alpha Kretin will start to shoot balls of energy towards the Bros. The player can know which Bro. the ball will go toward by the order the beam went through the body, red for Mario, green for Luigi, and blue for neither bro. This means that the more Kretins defeated, the less balls Alpha Kretin can shoot. This attack is countered with hammers. If hit, the brothers will have their defense lowered.

After all the six parts of Kretin are blue, it will fall apart and become Beta Kretin. Five units disappear, but one remains. It will proceed to create five clones in a hexagon pattern. These clones are very weak and are defeated in a single attack. If a duplicate is defeated, the real Kretin will simply create another on the next turn. Creating a new clone does not take up a full turn; Kretin can recreate the duplicate and attack in the same turn. In its Beta Kretin form, it starts to jump around with the other duplicates, trying to confuse the player by jumping to a different position. Its main attack is surrounding the bros in a hexagon shape, while they all start to charge up electricity. When one of the Kretins jumps, the electricity moves on to that spot. This attack can be avoided by jumping. It will eventually reform into Alpha Kretin, with the positions of the Kretins being different. In the remake, this happens immediately after it becomes inflicted with Fury. After the fight, Kretin is defeated. A stronger version of Kretin can be fought in The Gauntlet, this form is known as Kretin X.