Mario, Luigi and Paper Mario about to use Trio Glider in Bowser's Castle 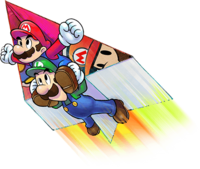 The Trio Glider is the fifth and final Trio Move in Mario & Luigi: Paper Jam. It is learnt in Bowser's Castle. Mario does a high, straight jump, Luigi then jumps over his shoulders, and the brothers grab Paper Mario, folded into an airplane, to start gliding. Like with previous Trio Attacks,

can cancel the move. By pressing

, the group can elevate in the air up to three times, albeit this yields a faster falling speed than before. This move can be useful to cross large gaps a Team Jump cannot reach or, with proper spacing, reach platforms too high for a normal Jump.

In battle, a somewhat similar move to a Trio Glider is used in two occasions; however, it works quite differently from Trio Glider. One is during an Airplane Guard, where Paper Mario aids Mario and Luigi in dodging powerful attacks folded into an airplane while being chased by a boss. The other is an "attack" made by Bowser Jr. and Paper Bowser Jr.; the two challenge Paper Mario in a flying contest, which pits him against a Paper Bowser Jr. folded in an airplane. Whoever goes the furthest wins. Paper Mario can elevate about a dozen of times, each time lower than before. The losing party is inflicted with heavy damage.