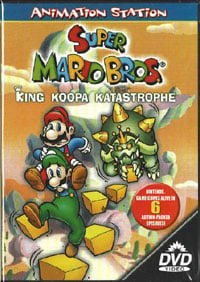 King Koopa Katastrophe is the first DVD out of four in the thematic DVD series of The Adventures of Super Mario Bros. 3 (it was also released as the last VHS of the series). It released on July 22, 2003 by Sterling Entertainment, unlike the later ones released by nCircle Entertainment. King Koopa Katastrophe didn't have an actual theme, but actually contained six of the first eight episodes of The Adventures of Super Mario Bros. 3 (excluding "Mind Your Mummy Mommy, Mario" and "Princess Toadstool for President"):

The significance of this DVD, aside of being the first The Adventures of Super Mario Bros. 3, is the fact that the original covers in "The Beauty of Kootie," "Toddler Terrors of Time Travel," and "Reign Storm" were not removed from it, unlike later releases of these episodes that played the instrumental of "Mega Move" from Captain N: The Game Master.